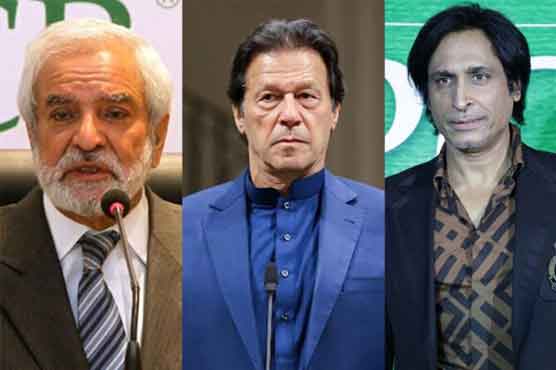 Both Ehsan Mani and Ramiz Raja met the prime minister at PM house.

ISLAMABAD (Dunya News) - Former Pakistan skipper and renowned commentator Ramiz Raja and PCB Chairman Ehsan Mani called on Prime Minister (PM) Imran Khan at PM House today in connection with appointment of the next chairman of the Pakistan Cricket Board (PCB) as Mani’s term is due to end this month.

Ehsan Mani briefed PM Khan on the matters of the cricket board and the structure of the domestic cricket.

It is pertinent to mention here that Ehsan Mani s current term as PCB chief is due to end on August 25, though he has recently said he intends to continue in the post.

As per rules, PM Imran Khan, who is also the Patron-in-chief of the board will send two names for the post of the PCB chairman to the governing board.

Though the two nominees are yet to be named, the patron s office has already named a former supreme court judge, Justice (retired) Sheikh Azmat, as the commissioner to carry out the election of the PCB chairperson.

In case PM Khan extends Mani s tenure, he will have to go through another process for his re-election as, according to the PCB constitution, a chairperson s total tenure "shall in no case exceed a period of six years". Mani has only completed three years so far.

Mani has also put in place a thorough review of Pakistan cricket s biggest revenue-generating product, the Pakistan Super League, and faces a time crunch to revise the financial model of the league.