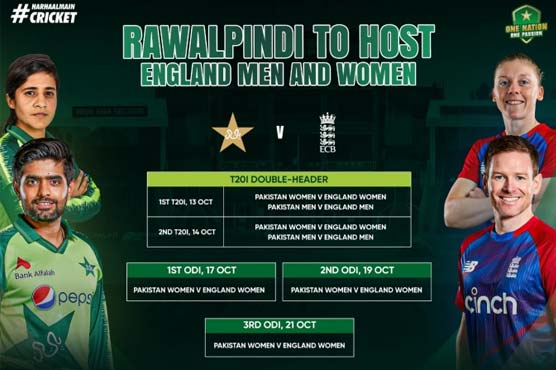 All matches will be played at the Pindi Cricket Stadium.

KARACHI (AFP) - Pakistan Cricket Board (PCB) on Friday confirmed that the England cricket team will play two Twenty20 internationals in October on their first tour of the country since 2005.

"The England men s side will visit Pakistan in October for two Twenty20 internationals. Both matches will be played at the Pindi Cricket Stadium in Rawalpindi on 13 and 14 October," said a Pakistan Cricket Board (PCB) release.

New Zealand s cricket team will also tour Pakistan in September -- their first after a gap of 18 years -- one of many tours that will further restore Pakistan s image as a safe host for international matches.

The West Indies and Australia are also due to play in Pakistan in the next seven months.

Pakistan became a no-go area for international teams after a deadly 2009 attack on the Sri Lanka team bus in Lahore.

But a rapid improvement in security in recent years has gradually seen the return of international cricket, with Zimbabwe, Sri Lanka, the West Indies and South Africa touring in the last six years.

England last toured Pakistan in 2005. In 2012 and 2015 Pakistan had to host England in the United Arab Emirates.

"England s men s and women s teams will arrive in Islamabad on 9 October and both teams will play Twenty20 internationals on October 14 and 15," said the PCB.

England s women will also play three one-day internationals on October 17, 19 and 21 at the Pindi stadium.

PCB Chief Executive Wasim Khan: “We are delighted to welcome both the England men’s team for what will be their first tour to Pakistan since 2005, and the England women’s team, who will be touring Pakistan for the first time. Both are additional tours with England men’s side scheduled to return to Pakistan in the last quarter of 2022 for white-ball and ICC World Test Championship fixtures.”

The matches were earlier scheduled to take place at the National Stadium, Karachi, on 14 and 15 October, but have been rescheduled due to operational and logistical reasons.

Series schedule (all matches to be played at the Pindi Cricket Stadium, match timing to be announced in due course):