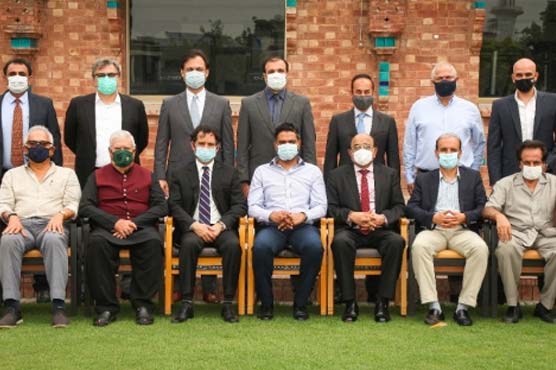 The PCB appreciated the efforts of the six Cricket Associations.

LAHORE (Dunya News) - Pakistan Cricket Board (PCB) and the First Boards of the six Cricket Associations met at the National High Performance Centre on Tuesday to review the progress made in the past few months while looking ahead to the objectives and targets for the upcoming season.

The PCB appreciated the efforts of the six Cricket Associations and acknowledged the challenges faced by the CA officials, while assuring complete support in the delivery of their responsibilities and obligations.

One of the highpoints of the daylong meeting was the identification, development and involvement of skilled personnel, particularly around the coaching side. It was observed that only the best trained and qualified coaches will support the six Cricket Associations in their endeavours in spotting and promoting quality talent to the next level.

In this regard, Grant Bradburn, Head of High Performance Coaching, provided a detailed briefing on the extensive work being done at the NHPC in relation to the player and coach development. The officials were assured the best available coaches had been appointed at the City Cricket Association level, who were successfully transferring their knowledge and experience in the ongoing two-day inter-city tournament.

The Cricket Associations also shared their plans around grassroots cricket, which is likely to resume with clubs, schools, college and university cricket later in the year. The officials also provided an update on their plans of setting up training and practice facilities, including developing or managing new infrastructures and stadia.

PCB Chief Executive Wasim Khan said: “I am delighted with today’s session as it has helped both the PCB and the Cricket Associations to understand each other better that will help in collectively moving forward. I have been pleased with the work done by the six Cricket Associations to date in a very short span of time and this reflects the passion and commitment of these officials.

“There have been a number of takeaways from today’s session and the PCB will ensure it streamlines all processes so that transitionally the authority is passed on to the Cricket Associations as part of its objective of decentralisation of cricket.

“I remain confident and optimistic that the First Boards in their one-year term, will be able to establish the system and process for the elected officials to take cricket within their jurisdictions forward.”

Meanwhile, the PCB has confirmed sponsors of the Sindh, Central Punjab and Southern Punjab Cricket Associations.

AQ Builders Pvt Ltd will have the principal sponsorship rights for Sindh, while Central Punjab will have Prime Oil and Ghee Mills as their principal sponsors also for a three-year period. Grassroots Cricket will sponsor the Southern Punjab Cricket Association.

For Sindh and Central Punjab, the three-year sponsorship term will commence from the 2021-22 season, while Southern Punjab’s sponsorship agreement will expire at the end of the 2022-23 season.