U19 cricket camp to begin in Karachi next week 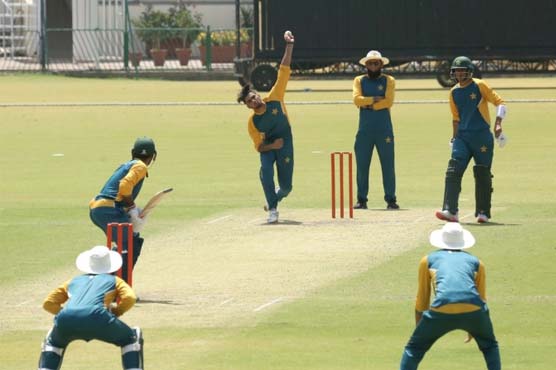 U19 cricket camp to begin in Karachi next week

The probables include all 17 members of the Pakistan U19 squad.

LAHORE (APP) - Pakistan Cricket Board (PCB) has invited 32 U19 players from across the country to take part in an eight-week long training camp that begins at Karachi’s Hanif Mohammad High Performance Centre at the National Stadium, from 29 July.

The probables include all 17 members of the Pakistan U19 squad that was chosen for the April tour of Bangladesh that had to be postponed days before the team’s departure due to rise of Covid-19 cases in Bangladesh.

The camp will be conducted in the supervision of U19 and Shaheen’s Head Coach Ijaz Ahmed along with the U19 support staff.

The camp will not only provide extensive practice, training and scenario-based match practice to the Pakistan U19 squad for next year’s ICC U19 Cricket World Cup (West Indies, January 2021) but it will also provide valuable exposure to the rest of the probables in a High Performance camp environment.

Besides cricket and fitness drills, the camp will also focus on grooming the players in various other life aspects that will be critical in their growth as cricketers and as potential Pakistan stars of the future.

Meanwhile, the 32 players and support staff will undergo Covid-19 tests in their respective home towns before assembling in Karachi, the group will be retested at the Hanif Mohammad HPC upon their arrival. During the camp, strict Covid-19 SOPs will be followed.

Chair of the Junior Selection Committee Saleem Jaffer said on Saturday: “ This is an extensive eight-week camp which will provide great exposure to the 32 players who are the future of Pakistan’s men’s cricket. We have a quality coaching staff that will look after the players, our aim is to provide the Pakistan probables for next year’s ICC U19 World Cup, the best possible practice and training ahead of the big event.

“The 32 players have been selected from across the country based on their performances, potential and future. The camp provides an ideal opportunity for them to showcase their talent and mettle and learn as much as they can about the needs and requirements for becoming a world class cricketer that can serve the country for a long time.”