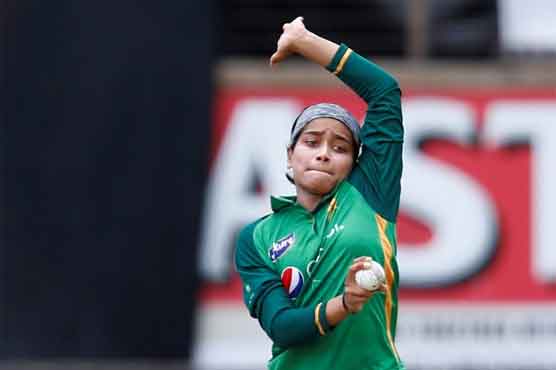 ST JOHN’S (Dunya News) – It was in the streets of Karachi where Fatima Sana’s passion for cricket developed. Her inspiration to take up fast bowling started by watching James Anderson, whom she used to emulate while playing with her neighbourhood friends.

The 19-year-old right-arm pacer was at the forefront of the national women’s side’s back-to-back victories against West Indies Women in Antigua as she took nine wickets across the last two ODIs of the series as Javeria Khan’s side romped to wins by four wickets and 22 runs (DLS method) in the fourth and fifth matches.

Fatima, on Sunday, turned heads in the last match by recording her maiden five-wicket haul in ODIs, which was also the first five-fer for a Pakistan woman bowler in the last eight years since Sadia Yousuf recorded one against Ireland Women in July 2013 in Dublin.

It was the fourth instance of a right-arm pacer recording a five-fer in ODIs since 6 May 2019, when Fatima made her debut.

Fatima took five wickets for just 39 runs from seven overs as Pakistan defended 194 in 34 overs in a rain-curtailed match. She accounted for the scalps of well-settled batters in Britney Cooper and Deandra Dottin, who scored the most and second most runs in the innings for the hosts.

“It was the happiest day of my life when I wore the Pakistan shirt in 2019, but I knew I needed to cement my place in the team by making contributions that lead my country to victories,” Fatima told pcb.com.pk after the final ODI. “You put in hard yards during fitness, gym and net sessions to compete with the international cricketers – the best of the best – and when you get results, it certainly make you happy, and when you start to taste success it further motivates you to work harder.”

Fatima finished the series as the leading wicket-taker amongst the fast bowlers from both sides with 11 scalps at an impressive average of 15.09 and an equally remarkable strike rate of 16.9.

Since her debut against South Africa Women in May 2019, she boasts the best strike rate – 25.7 – amongst the fast bowlers from four Asian sides (Bangladesh, India, Pakistan and Sri Lanka). It is also the best amongst all the Pakistan women bowlers since Fatima’s debut.

Overall, in 10 ODIs, Fatima has taken 14 wickets at a shade above 24 runs per dismissal.

Fatima said: “Growing up, it seemed as if fast bowling was all about delivering the ball with all the energy you have. That’s not what it is all about. Fast bowling is an art. You have to hit the right areas, and, more importantly, adapt with the conditions on offer. This is something I have learned on this trip.

“I had never been to the Caribbean before and upon arriving here, I was exposed to strong winds blowing across the grounds. I worked on how to bowl with the wind and control the ball movement both in the air and off the pitch. It has paid dividends. This tour has provided me a great learning experience.

“A lot of the credit goes to the coaching staff, who give us all they have behind the scenes and work with us around the clock to help us improve as cricketers. That I have seniors in Javeria Khan and a new ball partner in Diana Baig has also helped me a great deal.”

That an imposing 5.70 occupied the required run-rate column on the giant scoreboards of the Sir Vivian Richards Stadium before West Indies started their run-chase on Sunday was because of a sparkling 28 not out that Fatima had plundered at a strike rate of 147.36 to help her side add 40 from the last five overs.

“I did not bat much in street cricket because the boys thought I might get hit by the ball. So, initially, I invested all of my energy into bowling because I just wanted to play.

“Of-late, I have been working on my batting and I want to establish myself as an all-rounder,” said Fatima, who struck a four in each of the last four overs in the final ODI. “When you wear the golden star you want to contribute in every facet and win matches for your side. So, I am trying my best to develop myself into a player who contributes in every situation.”

From bowling in street cricket to winning matches for Pakistan, all in teen years, Fatima’s story is an inspiration for many girls wishing to take up the game.