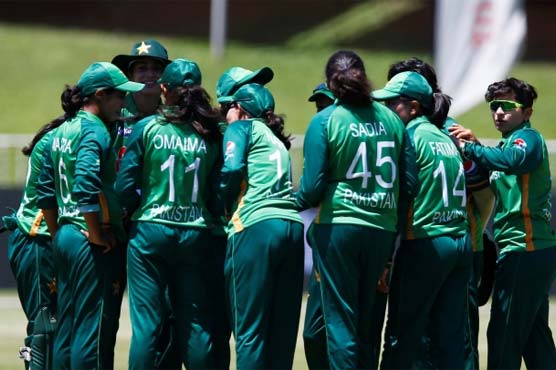 SAINT JOHN’S (Web Desk) - The Pakistan national women team’s preparations for the ICC Women’s World Cup Qualifier and the next year’s ICC Women’s Cricket World Cup commence from Wednesday when they take on West Indies Women in the first of the five One-Day Internationals at Coolidge Cricket Ground in Antigua.

This will be the fourth ODI Pakistan will play in 2021 after their tour of South Africa earlier in the year where they played the hosts in three-match series at the Kingsmead, Durban.

Including the first ODI, the Coolidge Cricket Ground will host the second and fifth ODIs on 9 and 18 July, and the Sir Vivian Richards Stadium will host the third and fourth fixtures on 12 and 15 July.

All-rounders Aliya Riaz and Nida Dar were amongst the top-three run-getters in the three ODIs against South Africa, which the hosts won, and Pakistan will be banking on their experience.

Aliya amassed 136 runs at an average of over 45 to finish as the top-scorer, while Nida struck two half-centuries to gather 124 runs at a staggering 62 runs per innings and finished as the third highest run-getter.

Pacer Diana Baig impressed with nine wickets from three innings – which included her career best four for 30. She was outstanding in the third T20I against West Indies on Sunday at the Sir Vivian Richards Stadium both in the field and with the ball as she took a phenomenal catch diving to her right to provide Pakistan their first breakthrough and took two wickets in the next over to finish with two for 17 from her four overs.

Pakistan put a disciplined show with the ball during the series restricting the hosts to 136 for six, 125 for six and gave them a run for their money in the third T20I with the hosts crossing the line in the chase of 103 with just five balls spare.

Nida Dar – who crossed the 100-T20I wicket milestone during the series – 19-year-old Fatima Sana and Diana all finished with four wickets each. Nida played a crucial role in drying up the flow of runs in the middle phase of the innings as she bowled at an economy of 4.83 and average of 13.50.

With the bowling department living up to the expectations, it is the batting which needs to perform to its full potential in the five-match series for Pakistan to deliver favourable results, believes Javeria Khan, the Pakistan captain who is the side’s most successful ODI batter with 2,744 runs at over 30.

Javeria Khan said: “Certainly, these five matches are very important. They will help us in finalising our combinations ahead of the World Cup Qualifiers and the all-important Women’s World Cup next year.

“Our goal is to ensure that our batting clicks and every batter performs to the fullest of their potential. These three T20Is have helped us to gauge what the conditions demand from the batters. I am hopeful that we will do well in the ODIs and the batters will handle the pressure well and remain calm in crunch situations.

“Of course, there is disappointment on the 3-0 loss in the T20Is. The players had worked hard in the lead up to this series, especially as a batting unit. We could not stand out as a fielding unit, but our bowling was a positive as it improved as the series progressed.

“Nida and Anam Amin were quite good and played a crucial role in drying up the runs for the opposition. Fatima Sana, despite being young, has shown her potential by handling the pressure well in tough situations. Diana bowled brilliantly in the last match.”

Pakistan Women ‘A’ to play three one-days from Saturday

The national women’s ‘A’ team had a brilliant T20 series as they defeated their West Indian counterparts 3-0.

Ayesha Zafar, the right-handed opener, top-scored in the series with 93 runs – including a half-century in the third match – and Kainat Imtiaz dominated the bowling chart with four wickets. Ramin Shameem, who captained Pakistan in the last two matches, Maham Tariq, Aimen Anwar finished with three wickets each.

They will return to action on 10 July to play West Indies Women ‘A’ in three one-days. Ramin will continue to lead the ‘A’ team.