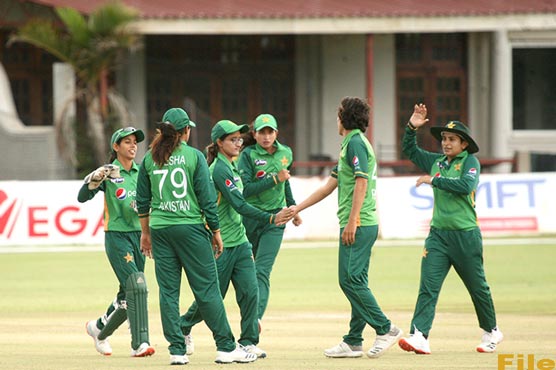 LAHORE (Dunya News) - Pakistan Cricket Board announced its women’s national and ‘A’ teams will tour the West Indies for a series of white-ball matches. The touring party will depart for Antigua, where all matches will be played, from Lahore on 23 June. The national side will play the West Indies in three T20Is and five One-Day Internationals, while the two countries’ ‘A’ sides will compete in three T20s and as many one-day matches.

This is the national women’s team third international tour in the last four months after they played three ODIs and as many T20Is against South Africa in Durban before traveling north to Harare to play Zimbabwe, a tour that was cut short due to flights restrictions.

Despite travel-related limitations around the world due of the ongoing Covid-19 pandemic, the PCB has continued to arrange the tours to provide its national women’s team competitive cricket to prepare for this year’s ICC Women’s World Cup Qualifier this year, followed by next year’s ICC Women’s Cricket World Cup and the Birmingham Commonwealth Games.

Pakistan and West Indies are ranked seventh and sixth in the ICC Women’s Team Rankings for ODI and T20I, respectively. Prior to this tour, the national women’s team has played three ODI series, two T20I series and featured in two ICC Women’s T20 World Cups in 2010 and 2018 in the Caribbean.

The last time these two sides faced off in bilateral series was in early 2019. Pakistan came back from behind in the United Arab Emirates to win the three ODIs 2-1 and the T20I series, played in Karachi, was won by West Indies 2-1, with the second match of the series going down the wire and the touring party winning it in the Super Over.

The two teams last met in the ICC Women’s T20 World Cup 2020 and the group-stage match was won by Pakistan as they comfortably chased down 125 with eight wickets and 10 balls spare.

That the ‘A’ side will travel to Antigua with the national side – the first instance of the two teams traveling together – provides further boost to the women’s game in the country. The players who have remained on the fringes of the national side will have an opportunity to impress the national selectors and the high-profile coaching staff ahead of the important global events.

This will also be the first tour that the ‘A’ side will undertake in the post-Covid-19 world. They last travelled to Sri Lanka in October 2019 for the ACC Emerging Women’s Asia Cup.

PCB Chief Executive Wasim Khan: “We are glad to announce that our senior and ‘A’ women teams will be traveling to the West Indies for competitive series in a year in which they have to feature in the ICC Women’s Cricket World Cup Qualifiers.

“This tour presents a great opportunity to our players to further strengthen their skills by getting the desired match practice – against a quality side – under their belts and utilise it for their preparations for the World Cup qualifiers and the main event early next year that will be followed by the Birmingham Commonwealth Games.

“Developing our women cricketers and providing them the required opportunities to develop themselves into world-class athletes is one of the key strategic objectives of the PCB, which we announced last year.

“Our players have put in hard yards in the recent High Performance camps in Karachi and Multan and I am hopeful that they will deliver favourable results under the able guidance of head coach David Hemp.”

The touring contingent will arrive in Lahore on Monday from where they will depart for Antigua.