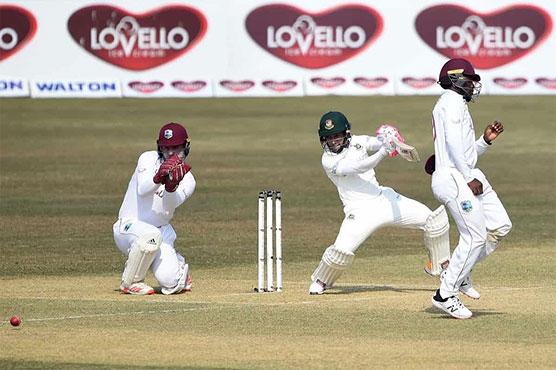 Bangladesh were 242-5 at stumps on day one of the first Test against West Indies.

CHITTAGONG (AFP) - Opener Shadman Islam struck a patient half-century and left-arm spinner Jomel Warrican claimed three wickets for 58 as Bangladesh and the West Indies shared the honours on the opening day of the first Test in Chittagong on Wednesday.

The hosts ended the day on 242-5, with Shadman leading the way with 59 off 154 balls -- and several others chipping in with useful knocks.

Mushfiqur Rahim (38), Mominul Haque (26) and Najmul Hossain (25) all got modest starts after Bangladesh opted to bat first, but they could not march on.

Shakib Al Hasan and Liton Das were unbeaten on 39 and 34 respectively at the close.

The visiting bowlers managed to strike whenever a partnership started to flourish, keeping Bangladesh in check.

Kemar Roach made the first breakthrough when he bowled opener Tamim Iqbal with an in-swinger that hit the top of the left-hander s middle stump.

Although Tamim fell for just nine runs, his tally in Test cricket went to 4,414 runs, giving him the record of Bangladesh s leading run-scorer -- for while at least.

Shadman and Najmul then steadied the innings with a 43-run stand before the latter was run out.

Warrican claimed the first of his three wickets beautifully, setting a trap for Bangladesh skipper Mominul, who obliged by lofting a catch to John Campbell at midwicket.

It ended Mominul s promising 53-run third-wicket stand with Shadman, who followed his captain off the field shortly after, having been trapped leg before by Warrican.

Shadman -- who hit six fours -- could have survived if he had reviewed the decision of the on-field umpire, as a replay showed the ball was going down leg.

Shadman regretted his decision not to seek a review.

"I thought that the ball pitched in line and would hit the stump. Therefore I did not go for the review," he said.

"I was a bit frustrated after seeing the replay in the dressing room, but it is part of the game."

Mushfiqur then reclaimed his record as the country s leading run-getter and rebuilt Bangladesh s innings with a 59-run stand with Shakib.

Their partnership came to an end when Mushfiqur poked a delivery from Warrican to Rahkeem Cornwall at slip.

"It was a very good day for me in the office. I got three vital wickets. Hopefully I can benefit the team with more wickets tomorrow," Warrican said.

"The Bangladesh batsmen play spin very well, so we had to be very disciplined and set the right fields. We stuck to the basics and just made sure I bowled in good areas and challenged the batsmen."