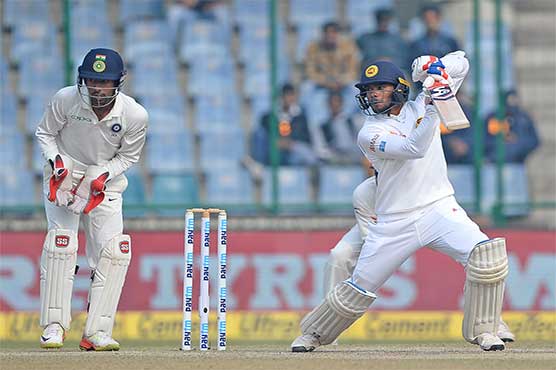 Dhananjaya de Silva was batting on 72 with skipper Dinesh Chandimal on 27 at lunch.

NEW DELHI (AFP) – Sri Lanka were 119 for four at lunch while chasing a mammoth 410 for victory against India on the final day of the pollution-hit third Test in New Delhi on Wednesday.

Dhananjaya de Silva was batting on 72 with skipper Dinesh Chandimal on 27 on day five at the Feroz Shah Kotla ground, where heavy smog that has persisted for days remained at very unhealthy levels.

Sri Lanka must bat out two more sessions to save the match, the last of the three-Test series. India lead the series 1-0.

Angelo Mathews had added just one run when he became Ravindra Jadeja’s third victim of the innings Wednesday, after the visitors resumed on their overnight 31-3.

The Test has been marred by severe pollution in the Indian capital, with fast bowlers from both sides vomiting on the ground Tuesday.

The US embassy website on Wednesday showed concentrations of the smallest and most harmful airborne pollutants hit 234, better than a day earlier but still nearly nine times the World Health Organization’s safe limits.