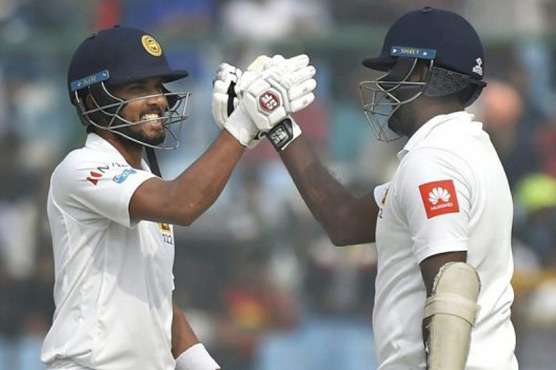 "The innings of Chandimal and I, we had to grind."

NEW DELHI (AFP) - Angelo Mathews expressed helplessness over the worsening pollution levels after his defiant century lifted Sri Lanka on a smoggy day three of the third Test against India in New Delhi on Monday.

Mathews (111) shared a 181-run fourth-wicket stand with skipper Dinesh Chandimal, who was batting on 147 when bad light stopped play at the Feroz Shah Kotla ground.

But the hard work by the Sri Lankan batsmen was undone somewhat as the Indian bowlers struck back to claim six wickets, with spinner Ravichandran Ashwin picking up three of them.

The visitors were 356 for nine at close of play, still trailing India by 180 in their first innings with just one wicket in hand.

The islanders had resumed the day on 131-3 in choking smog that has made international headlines.

Mathews and Chandimal braved the toxic air for about three sessions after getting together on a dramatic Sunday when Sri Lankan players wearing face masks halted play for about 20 minutes, complaining of the pollution.

"It is pretty much the same (from Sunday). Or a bit worse probably. You have got to deal with what you have for the next two days," Mathews told reporters.

"It is up to the match referee and umpires to take the decision (on pollution). We are here to play cricket and we want to get out to the park," he added.

Mathews, who survived three dropped catches, ended his two-year century drought with a boundary off paceman Ishant Sharma. His last century, at Galle, had also come against India.

The former captain played positive cricket during his 268-ball stay that was laced with 11 fours and two sixes. He fell to Ashwin s off-spin a little before the tea break.

"Pressure is there all the time. We have to work extremely hard for runs. You don t get many loose balls," said Mathews.

"The innings of Chandimal and I, we had to grind."

Sadeera Samarawickrama, who came down the order after taking a blow on his helmet on day one, put up some resistance with a 33-run knock before being caught behind off Ishant Sharma.

But Ashwin, who ended with 3-90, combined with the fast bowlers to tear into the Sri Lankan lower order in the final session, sending back debutant Roshen Silva and Niroshan Dickwella for zero.

Chandimal, who seemed a little uneasy in the morning while calling for his trainer, frustrated the Indian bowlers and helped his team avoid a follow-on.

"The kind of wickets we wanted to prepare on before going to South Africa we haven t been provided with, so it didn t go as per our plans," said Shami.

"It s a good thing in a way as on these kind of tracks you need to work really hard as a bowler."

Pollution worsened in the city Monday, with concentration of the smallest and most harmful airborne pollutants 18 times the World Health Organization s safe level just before the players took lunch.

On Sunday it was 15 times the WHO limit, according to the US embassy website.

"Of course it is a matter of concern but it wasn t as bad as it was shown out to be, though it might be that we are used to it and have become prone to it," Shami said.

"It s my belief that we should reduce factors which cause pollution, as at the end of the day it s us who get affected."

Sri Lanka, who trail 1-0 in the three-match series after their thrashing in the second game, need a win to draw the series against top-ranked India. The first Test ended in a draw.