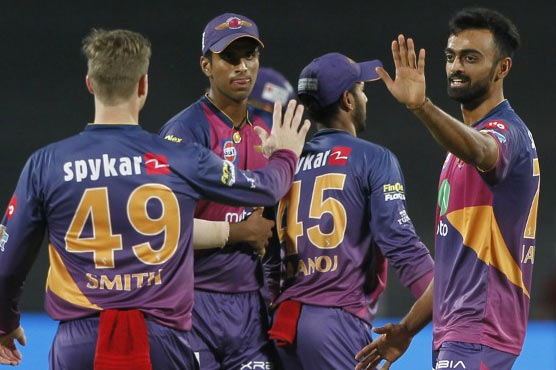 (Web Desk) – Indian Premier League (IPL) 2017 player Jaydev Unadkat has named Wasim Akram as his mentor and teacher. He became the second highest wicket-taker in IPL 2017 with 24 in just 12 matches (best figures 5/30) to his name while playing from runner up team Rising Pune Supergiant.

The Pune bowler earlier played from Kolkata Knight Riders where he spent two years under the coaching of Pakistan’s “Sultan of Swing” Wasim Akram. He gave credit to the 50-year-old legend for teaching him basics of swing fast bowling.

Unadkat was, in fact, a replacement of Ashok Dinda who wasn’t able to impress the selectors with his performance in previous season. The 25-year-old pacer stood up to his selection and became one of the highest wicket-takers in IPL 2017, only second to the Purple Cap winner Bhuvneshwar Kumar who picked 26 wickets after playing 14 matches (best figures 5/19).

While giving credit to the Pakistani bowling legend, he said, “I (Unadkat) was too star struck by (Wasim) Akram. But I did manage to learn the art of swing bowling from him. I also learnt different ways of gripping the ball which I was not aware of. I have come a long way but taught me the basics of (fast) bowling.”

He was purchased by Rising Pune Supergiants for USD 46451 in IPL 2017 auction. Unadkat gave credit to Wasim Akram for teaching him basics of swing bowling. He praised the role of captain Steve Smith and Mahendra Singh Dhoni for all the support. He admitted to have worked on controlling the aggression and changing his attitude towards the game.

The young fast bowling got success in IPL by bowling yorkers, cutters, slower ones, adjusting pace and maintaining the right line and length.

Three drown as car falls into canal in Khanewal