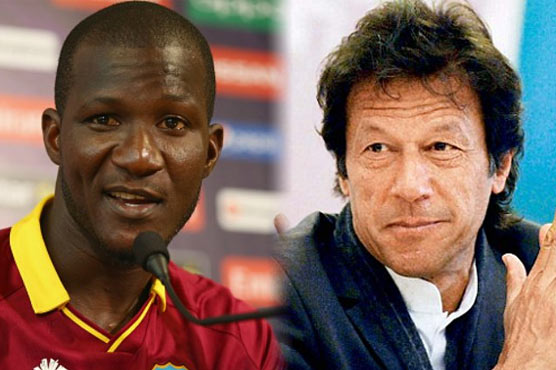 He later appeared to soften his position

KARACHI (AFP) - Pakistan cricket legend Imran Khan angered fans Tuesday after a leaked video emerged of him describing international stars who agreed to play in the country despite security threats as "third-class" and anonymous.

The remarks by the 64-year-old who now leads a major political party were captured by a local journalist on a mobile phone and uploaded online, where it sparked a furious backlash including from many of his own supporters.

Khan, a vocal critic of the government of Prime Minister Nawaz Sharif, had opposed staging Sunday s final of the Pakistan Super League in Lahore instead of the UAE where earlier matches were played, citing security grounds.

He later appeared to soften his position, using Twitter to congratulate the public on their participation and enthusiasm in a match widely hailed by observers for unifying the country, which has not hosted a major national team since 2009 when Islamist gunmen attacked a touring Sri Lanka side.

But speaking to party aides on Tuesday, he criticised the tournament and poked fun at the nine foreign players who agreed to play despite a recent resurgence in violence.

"I didn t even know the names of the  phateechar  players," he said, using a derogatory term that roughly translates as "third-class", while others around him laughed.

"I think they grabbed some people from Africa and others from elsewhere to claim that they were foreign players," he added.

The video went viral online where many rushed to defend the foreign stars, particularly two-time World T20 winner Darren Sammy of the West Indies, who led Peshawar Zalmi to victory and whose dancing celebrations and effusive praise of Pakistan had made him a major hit with fans.

"These #Phateechar players have put in more effort in restoring the international cricket than the so called selfless leader," wrote Twitter user Rabiya Naveed.

Another user, @Dr_sheffield123, wrote "I am ur diehard fan but u made me upset like millions & am thinking whthr u r in ur senses or have lost ur mind?"

Some suggested Khan was motivated by petty jealousy because the government which he opposes had taken credit for the success of the match.

He later appeared on the local TV network Geo News, doubling down on his position.

"Sammy was captain but he is not a big player," he said.

"Had Chris Gayle come, had Kevin Pietersen come, I would have said they were big international stars."

Gayle featured for Karachi Kings in the matches held in Dubai and Sharjah but his team failed to qualify for the final.

Pietersen withdrew from the final over security fears along with other Quetta players Rilee Rossouw from South Africa, Luke Wright and Tymal Mills, who are both from England.

"I can t even repeat those derogatory remarks because they are so insulting to the players," he said.

Can perform well in all three formats: Kamran Akmal

Lahore likely to host Pakistan vs World-XI this September