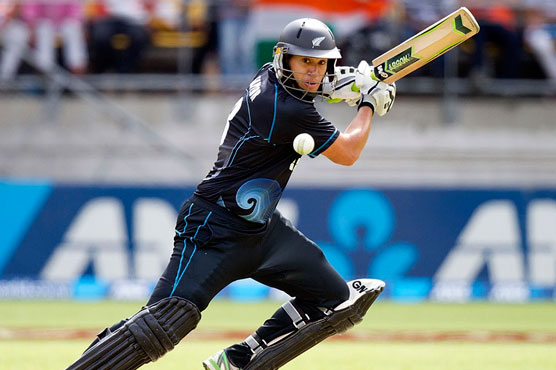 Taylor brought up his 10th ODI century after 105 balls with a boundary hit through mid-wicket.

Already 3-0 ahead in the five-match series, the New Zealanders refused to ease up after being sent in to bat in the dead rubber and finished their innings at 303 for five.

Taylor, fresh from an unbeaten ton in the fourth match in Hamilton, top-scored with 102, receiving able support from Kane Williamson (88), who has scored a half-century in every match of the series.

India captain Mahendra Singh Dhoni urged his pacemen to "use their brains" after losing the fourth match on Tuesday, and the new-ball pair of Mohammed Shami and Bhuvneshwar Kumar initially responded to the challenge.

Shami began with two maidens, while Kumar showed improved accuracy as the New Zealanders were restricted to just 10 runs in the first five overs.

The hard work paid off when Jesse Ryder (17) snicked an outside edge from Kumar to Ajinkya Rahane at gully as the frustrated batsman tried to break the shackles.

Martin Guptill was then out for 16 after a tentative start, hitting the ball straight to Shami, who took the chance after a nervous juggle.

That brought the in-form partnership of Williamson and Taylor together and they immediately lifted the glacial run rate, scoring more boundaries in their first three overs at the crease than New Zealand managed in the previous 12.

They brought up their third century partnership of the series in 108 balls, with Williamson reaching his fifth consecutive 50 in the 30th over.

Taylor notched his own half century a few balls later as the pressure India had painstakingly built early in the innings dissipated.

Williamson departed on 88 when he sliced a Varun Aaron delivery to Rahane at point and was replaced by Brendon McCullum, who provided a useful 23 off 18 balls before he was caught at cover trying to drive Virat Kohli.

Taylor brought up his 10th ODI century after 105 balls with a boundary hit through mid-wicket, but was out next ball attempting to belt Shami over the boundary.

Jimmy Neesham contributed an unbeaten 34 off 19 balls to take New Zealand past 300, a mark that India s batsmen have reached only once in this series.