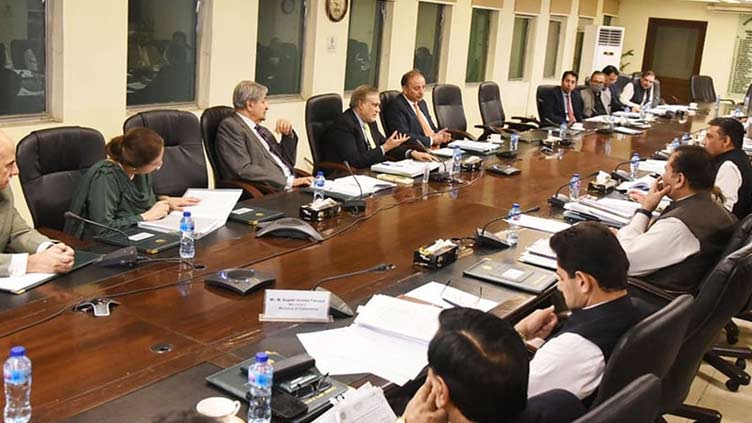 ISLAMABAD (Dunya News) – The Economic Coordination Committee (ECC) on Thursday considered and approved a summary of Ministry of Industries & Production (MoIP) and allowed the payment of projected net salary of Rs. 1,378 million for the Financial Year 2022-23 to be disbursed every month to Pakistan Steel Mills (PSM) employees through a technical supplementary grant.

This decision will ensure the disbursement of monthly salaries to the employees. This was approved in ECC of Cabinet meeting Chaired by Federal Minister for Finance and Revenue Senator Mohammad Ishaq Dar, said a statement.

Ministry of Commerce presented a summary on amendment in Import Policy Order 2022 to allow import of the Holy Quran subject to NOC from the relevant Federal or the Provincial Authority.

The summary was presented in the light of the directions of the honourable Lahore High court and Baluchistan High court directing the Federal and Provincial authorities to ensure only error-free printing, publishing, recording and import of copies of the Holy Quran. The proposed amendment of import of the Holy Quean was subject to NOC. The ECC after discussion approved the proposal.

The ECC considered a summary of Petroleum Division and allowed to grant a Development and Production Lease (D&PL) for (15) fifteen years w.e.f 15-01-2022 over Kandhkot Mining Lease area on existing Gas Price and subject to the condition that M/s PPL will pay all the financial obligations in accordance with Petroleum Policy 2012.
Kandhkot discovery was made by PPL in 1959. The Government granted the mining lease over Kandhkot Gas field for a period of 30 years in 1962 which was renewed for further thirty years in 1992.

Petroleum Division submitted another summary on revival of revoked petroleum exploration licenses. It was informed that (11) eleven exploration licenses were revoked due to non performance of work commitment and non-payment of financial obligations by various exploration & production companies.

In all the eleven blocks, status quo order was passed by the respective Civil Courts, Islamabad and Sindh High Courts. It is pertinent to mention that the litigant companies have approached the government and shown keen interest in exploration of the blocks awarded. In order to resolve this longstanding issue of litigation, which has resulted in halting of exploration and production activities in some of the respective blocks of the country, Petroleum Division has developed a framework for revival of revoked licenses through out of court settlement.

The ECC after detail discussion approved the proposed framework.

Pakistan (AEP) Limited and ENI Pakistan (M) Limited , respectively to M/s Prime International Oil & Gas Company Limited (PIOGCL) subject to condition that PIOGCL shall be liable to the Government for all the minimum work commitments and financial obligations and Government’s revenue s will not be adversely affected after this change of effective control.