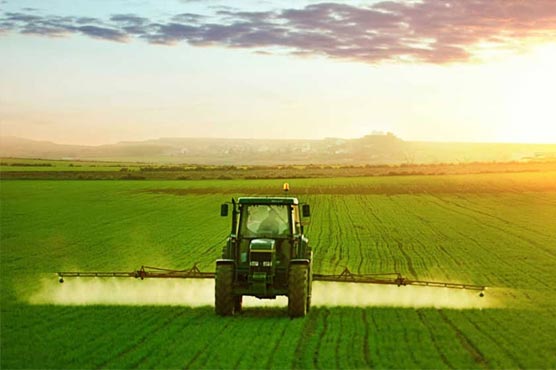 Agriculture development is the main component of the second-phase of CPEC.

ISLAMABAD (APP) – As many as 18 projects worth around Rs83 billion have been identified in agriculture sector under the multi-billion dollar China-Pakistan Economic Corridor (CPEC) Project, with an aim to exploit its true potential and modernize it for the sustainable economic growth.

“Agriculture development is the main component of the second-phase of CPEC and both China and Pakistan are determined to exploit this sector for mutual benefit,” said Senior Joint Secretary and Spokesman of the Ministry of National Food Security and Research Javed Hammayun while talking to APP here.

About twelve short, medium and long-term projects identified by the China-Pakistan Joint Working Groups (JWG) are related to Livestock Wing, Ministry of National Food SEcurty and Research (MNFS&R) and Livestock and Dairy Development Department, six projects are related to research and development to be executed b Pakistan Agricultural Research Council while one project has been identified for the establishment of Aquaculture Park in Costal Areas of Pakistan.

Giving break up details, Javed said, through these projects both the countries would cooperate in the areas of capacity building, germplasm resources, agriculture product processing and technology extension, he added.

The other identified projects included uplifting of local agriculture sector including fisheries, establishment of foot and mouth disease free zones, and market information as well as agricultural trade, he added.

Besides, the two sides have also signed various agreements and protocols to facilitate cooperation in the areas of trade and research, he said adding that an MoU on Strengthening of Cooperation on Plant Pest and Disease Control was signed during the visit of the President to China in March, 2020.

During the said high level visit, Ministry of Planning and Development had also signed an MOU with its Chinese counterpart to bring the two Joint Working Groups (JWGs) including Agricultural Cooperation and Science Technology under CPEC, he added.

Both sides agreed to establish the center for sustainable control of plants pest diseases in Pakistan (Karachi) for which Department of Plant Protection will be the lead Executing Agency.

He said that Pakistan and China had also agreed to conduct third meeting of JWG in 2021 in Beijing.

Apprising the progress made on different projects finalized by JWG, he said that Foot and Mouth Disease (FMDF) free zone in Bahawalpur Division was established by Punjab, adding that in this regard an updated technical matrix on establishment of FMD Free Zones proposed by Livestock and Dairy Development Department, Punjab had been shared with Chinese side along with invitation to Chinese experts for inspection.

Livestock Wing of Ministry of National Food Security and Research has provided requisite information on prescribed questionnaire for export of poultry products to China and invited Chinese technical team to visit Pakistan for inspection of poultry establishments, he added.

In order to promote bilateral collaboration in research and transfer of technology, Chines side had also expressed its consent for providing financial assistance for the establishment of Center of Excellence at National Agriculture Research Center on agriculture, livestock and fisheries.

Javed Hammayun further informed that Pakistan was keen to develop its research collaboration with Chinese institutions in order to enhance per-acre crop output of all major crop including wheat, rice, cotton and in this regard the other side has also agreed for providing technical and financial assistance for the establishment of center of excellence on Central Cotton Research Institute Multan, besides the establishment of intelligent green house farming in Pakistan.

The seven projects to be executed by PARC included promotion of cherry cultivation on commercial Scale in Gilgit-Baltistan for taping the export potential to China, adding that this project would be completed within five years with an estimated cost of Rs, 1,200 million, he added.

The Northern Areas of the country have enamors potential to produce dry fruits and recognizing the importance the JWG had also identified the project promotion and development of Pistachio in potential ecologies of Pakistan under CPEC initiatives and the estimated cost of initiative was calculated at Rs1,300 million and it would be completed within five years time period, he remarked.

The NIGAB in collaboration with Chinese Academy of Agriculture Sciences had developed four high-yielding virus free banana verities, he said adding that new verities of potatoes were also developed which would have significant impact on local output of crop.

“We are also working with Chinese scientists for the development of long grain green super rice and high-yielding sugarcane and cotton verities and work on these crops were on advanced stage and it was expected that within a short span of time the verities of above mentioned crops would be available for local cultivation that would have revolutionary impact on agriculture sector in the country”, he added.