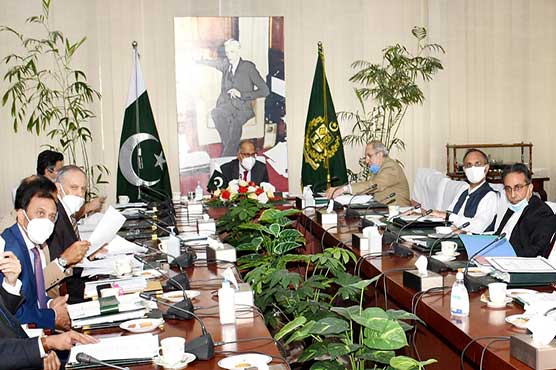 ISLAMABAD (Dunya News) – Economic Coordination Committee (ECC) of the Cabinet Wednesday approved an amount of Rs3850 million for provision of salaries to the employees of Pakistan State Mills (PSM) for the financial year 2020-21, which would be disbursed every month.

However, though the ECC agreed in principle that the dues to the retired non-litigant employees should be paid, the forum decided to seek a detailed report from the Ministry of Industries and Production on the nature of liabilities due to PSM on account of retirement dues, the liabilities that will accrue as a result of the retrenchment plan and other expenditures on account of utilities or any other charges due on PSM.

Adviser to the Prime Minister on Finance and Revenue Dr.Abdul Hafeez Shaikh chaired the ECC meeting, according to press statement issued by the Finance Ministry.

It said that the Ministry of Industries and Production had presented the two separate summaries to ECC for the disbursement of salaries to the PSM employees and for clearing the liabilities of its PSM employees who have not approached the Court (Sindh High Court).

It is pertinent to mention that ECC was briefed that earlier this month, the retired employees of the PSM were already paid Rs12.741 billion as retirement dues but the court had asked to pay the non-litigant retired employees as well that will further add Rs.11.68 billion to the expenditure of the Federal government.

The ECC also considered and approved 2 technical supplementary grants (TSGs) for the Ministry of Interior amounting to Rs111 million for clearing various liabilities of the ICT administration.

ECC also granted waiver of guarantee fee on foreign loans of K2/K3 projects, the statement said adding that according to a report prepared by Pakistan Atomic Energy Commission (PAEC) and Economic Affairs Division (ADB), there would be a benefit of Rs.0.07/KWh to the general public by the waiver of this fee.

For the centralized procurement of the vaccines under the Expanded Program on Immunization (EPI), ECC approved shifting of Federal EPI from development to revenue expenditure with an allocation of Rs9, 903.195 million through TSG for vaccine procurement in CFY to avoid interruption in the immunization program.

In order to increase the share of manmade fibers (MMF) in the textile goods for better unit prices in the international markets, product diversification and most importantly, value addition, the Additional Customs Duty (ACDs) and Regulatory Duty (RDs) on selected HS codes of textile sector was allowed to be removed. The total revenue impact of these exemptions would be Rs533 million.

ECC also allowed notifying the Kharlachi Border Crossing between Pakistan and Afghanistan as a rebatable border point for export of goods to Afghanistan. Earlier the opening of this border point helped in the release of congested transit trucks at the Afghan border due to Covid-19 restrictions.

ECC allowed the exemption from re-lending of the funds for Pakistan National Emergency Preparedness and Response Plan for Covid-19 to cover the country’s requirements for 12 months through emergency operations.

In order to administer the program, Asian Development Bank would provide a loan of US$ 100 million and an additional US$ 5 million would provided by the government of Norway as a grant administered by ADB.

The Asian Development Bank has already signed a loan agreement with the Ministry of Economic Affairs to finance the said project.