Pakistan, Turkey sign MoU for cooperation on trade and customs 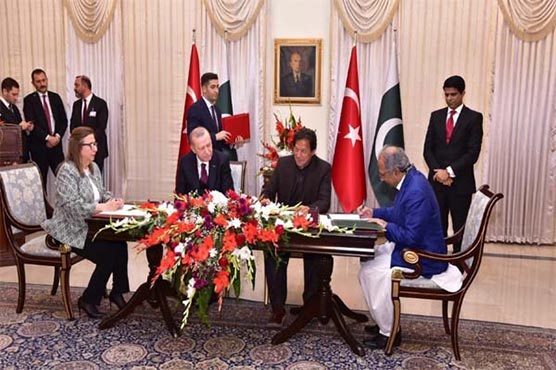 Pakistan, Turkey sign MoU for cooperation on trade and customs

As a result of mutual communication, the FBR received a draft MoU on the subject matter.

ISLAMABAD (APP) – A memorandum of understanding (MoU) was signed yesterday between the Ministry of Trade of the Republic of Turkey and the Federal Board of Revenue (FBR) on trade facilitation and customs cooperation matters.

The MoU was signed by Turkish trade minister Ms Ruhsar Peckan, and Adviser to the Prime Minister on Finance and Revenue Abdul Hafeez Sheikh at the PM House in Islamabad.

According to a press statement, the FBR identified a number of countries, including Turkey, for Cooperation and Mutual Assistance in Customs Matters in order to strengthen Customs controls and meet challenges arising from expansion and diversification of Pakistan’s international trade.

Enhancement of Customs cooperation (and signing of the subject MoU), therefore, was very important in backdrop of the Turkish President’s current visit to Pakistan, the statement added.

As a result of mutual communication, the FBR received a draft MoU on the subject matter which was circulated to all stakeholders and after the requisite input, the same was finalized with the Turkish side.

The MoU has been finalised in furtherance of the “agreement between the Republic of Turkey and the Islamic Republic of Pakistan on Co-operation and Mutual Assistance in Customs Matters” signed in Ankara on 20.06.2002.

The areas wherein customs cooperation would be undertaken with Turkish Ministry of Trade and Customs Agency, under this MoU include the cooperation for establishment of Electronic Data Exchange for exchange of information and documents regarding international movements of the goods and vehicles between the parties.

It also includes assistance to each other in order to improve customs practices between the two countries.

Both countries would communicate, share and exchange all available information relating to imports, exports, and transit operations and would also cooperate in combating different smuggling methods and customs offences.

To ensure the implementation of the provisions of the MoU, a Joint Technical Committee has been constituted.

The benefits arising from the signed MoU include an institutionalized information exchange mechanism between Pakistan and Turkey.

It is expected to bring reduced risk of evasion of duties and taxes, the statement said adding that it was expected to have reduced clearance time for import or export cargo through application of risk-assessment techniques on the basis of available information.

The MoU would assure assistance by Turkish Customs Agency and would promote bilateral trade, including transit trade, in the region. The signing of this MoU would also increase confidence of Pakistan’s international trading partners.

The Chairperson, FBR, Ms Nausheen Javaid Amjad stated that implementation of this MoU would have a number of benefits for both Turkish Customs Agency and Federal Board of Revenue.

According to her, the relevant organizations would be able to exchange vital information seamlessly which would go a long way in facilitating and securing bilateral trade between both countries.

She felicitated the officers of Federal Board of Revenue to achieve this milestone in collaboration with the relevant officers of the Ministry of Trade of Turkey.

On this significant development, the Member Customs, Muhammad Javed Ghani underscored the importance of mutual cooperation and assistance in effectively coping with the challenges that Customs and Trade organizations world over are confronting at present.

He stated that, with implementation of this MoU, relevant organizations would be able to benefit from each other regarding a number of important areas which would lead to safeguard / promotion of economic interests of both Turkey and Pakistan.