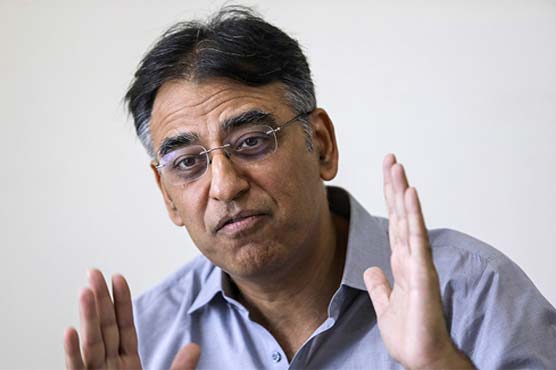 Addressing a ceremony of Federation of Pakistan Chambers of Commerce and Industry in Karachi on Saturday, he said that the country’s income could be increased by addressing the complexities of the real estate sector.

The minister said that the ease of doing business is the priority of Pakistan Tehreek-e-Insaf (PTI) government, adding that the government will focus on economic priorities while formulating the foreign policy.

Umer went on to say that the government has decided to set economic diplomacy initiative to reap maximum benefits in its relations with other countries.

“The government is well aware of current economic conditions and is trying to maneuver in a sagacious manner,” Asad Umar added.

The finance minister said that government has set a target of increasing revenues and for this purpose FBR is being reactivated, adding that a new mechanism was also being evolved for tax refunding to facilitate the businesses. He said FBR intends to raise its own force.

The minister said: “Export package is very important for businesses and that is why government has reduced the gas prices for export industry in Punjab, adding, Pakistan needs to broaden its export market.”

Asad Umer said we have to work while staying within our limitations. He said Prime minister is taking special steps to stop the smuggling of goods into the country.

Regarding approaching the International Monetary Fund (IMF) for bailout package, he said that Pakistan would approach the fund for the last time as it needs US$12 dollars.

I would immediately step down if I couldn’t change the policy, he added.

Earlier, the minister said that agreement with the International Monetary Fund (IMF) is likely to be signed by the end of December this year. “The program with IMF will be last one,” the minister stated while addressing a ceremony of Brokers at Pakistan Stock Exchange in Karachi today (Saturday).

He said the economic indicators have now started moving in the right direction as a result of steps taken by the government. He said exports and the remittances are witnessing healthy trend.

The finance minister said that measures are being taken to bring improvement in the capital market. Several bail out packages from the IMF were taken in the past, he added.

A delegation of the International Monetary Fund (IMF) would visit Pakistan on November 7 to finalize terms and conditions for a bailout programme.

The finance minister last week claimed that the government’s decision to approach the IMF for the bailout package was the inevitable due to wrong economic policies of the past government causing enhanced current account deficit.

“At present, the total shortfall of the country’s foreign exchange reserves is around $12 billion, which cannot be bridged through the IMF loan. The government will also utilize other sources for the purpose,” Asad Umar said.

He said during his meetings with the IMF officials in Bali, Indonesia, the two sides expressed the desire that it might be the last bailout package for Pakistan.

“We have sought the package only to get relief for the time being and run the country’s economic system smoothly,” he said. “Meanwhile, we will improve our capacity by gradually reducing trade deficit, increasing foreign remittances, improving tax revenues, and introducing other revenue generation measures in a bid to avoid the IMF packages in future”.

The finance minister had stated that it was not the fault of the last PML-N government to avail the IMF’s bailout package and similarly, now the Pakistan Tehreek-e-Insaf government was forced the approach the international lender.