US economy looks stronger as hiring, wages pick up 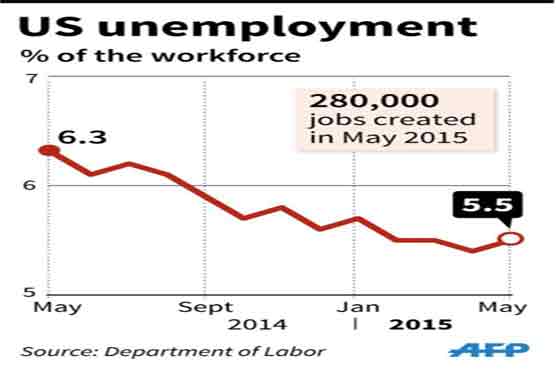 Washington (AFP) - US businesses accelerated hiring and raised wages at a faster pace last month in a fresh sign the country s economy is rebounding from the winter stall.

In a report that gives the Federal Reserve more reason to move toward an interest rate hike in the coming months, the Labor Department said Friday that the economy pumped out 280,000 jobs in May, far more than expected and well above the past year s pace of 251,000 a month.

Wages, which have been frustratingly flat since the country s emergence from the 2008-09 recession, also picked up in an indication that the labor market is tightening.

While the unemployment rate ticked up slightly to 5.5 percent, analysts said that represented not more job losses but a surge in the number of new entrants and returnees to the labor market, with most but not all of them finding jobs.

That was backed by rise in the rate of workforce participation to 62.9 percent, still low by historical standards but up 0.1 percentage point in each of the last two months.

"The US labor market finally came out of its winter doldrums," said Harm Bandholz, chief US economist at UniCredit.

The May report showed that service industries are easily offsetting the heavy layoffs in the oil industry, due to the crash in the price of crude oil, and weak hiring in manufacturing, which has been hurt by the strong dollar.

Average wages were up a solid 2.3 percent from a year ago, and were rising at a 2.9 percent annual pace over the last three months, the fastest since 2009.

"The economy shows signs of rebounding strongly from the weak spell seen at the start of the year, pulling wages higher and allaying worries that the upturn lacks sustainability," said Chris Williamson, chief economist at Markit.

Ian Shepherdson of Pantheon Macroeconomics noted that, on top of the May numbers, the job creation figures for the previous two months were revised upwards by a net 32,000.

"If payrolls continue to rise at anything like this pace -- and every indicator we follow says they will... the unemployment rate will continue to trend downwards rapidly," he said.

Shepherdson and others said the May report raises the likelihood that the Federal Reserve will soon launch into a series or increases of its benchmark Fed funds interest rate, locked at zero since the recession.

"If the June employment report is as strong as this one, a July hike can t be ruled out; if not then, we think September is the latest" possible delay for the Fed, Shepherdson added.

Markets took the jobs report the same way: stocks sagged, US bond yields jumped, with the five-year Treasury surging from 1.67 percent to 1.75 percent, and the dollar surging around 1 percent against the euro, to $1.1113.

Analysts, however, said the Fed would have to wait for a few months more of strong data to be certain that the economy can sustain an increase in interest rates.

Other recent data has suggested certain weaknesses, including weak industrial output, a halt to gains in productivity and signs that US consumers remain reticent about spending, a phenomenon that has puzzled economists.

But if the increase in wages is sustained, many think consumers could begin to loosen their purse strings.

That appeared evident in the surge of auto sales last month to their best level in a decade, and expectations of a strong summer for the tourism and entertainment industries.

"It is still too soon to say that wage growth ... is breaking out to the upside," said analysts at Deutsche Bank.

"The bottom line is that the May labor data re-establish the economy s underlying momentum and keep monetary policymakers on track to begin the process of interest rate normalization this September."

US calls for cyber reform after massive hack