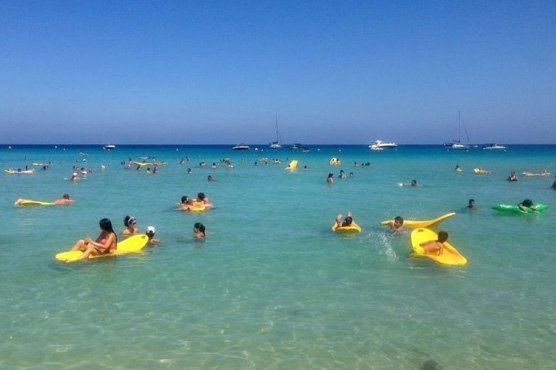 The number of people visiting the east Mediterranean island, which is heavily reliant on income generated by tourism, rose 1.5 percent in 2014 after recoiling 2.4 percent the previous year.

The figures represent a rare upward trend for the economy of Cyprus, which earlier in January saw its national carrier Cyprus Airways cease flights after nearly seven decades of service.

An increase in tourists arriving from Russia and Israel last year helped offset a decline in the island s main tourist market from Britain, data from the Statistical Service of Cyprus showed.

Although overall arrivals in 2013 were down, the 2.08 billion euros ($2.42 billion) they generated was the best for a decade. Revenue figures for last year have yet to be released.

Improved arrival figures combined with better revenue is fanning hopes that the key sector can pull the economy out of recession in 2015.

Cyprus is benefitting from more direct flights but industry experts say the falling ruble and the demise of Cyprus Airways could have an impact next year.

The carrier was grounded after European Union regulators ordered the government to recover illegal state aid granted to the ailing airline.

Cyprus needed a 10 billion euro bailout from international lenders in 2013 to save its banking industry and stop the eurozone member going bankrupt.

Income from tourism in Cyprus, which touts itself as a country blessed with more than 300 days of sunshine a year, represents more than 10 percent of gross domestic product.

At least two killed in Russian mine blast: officials