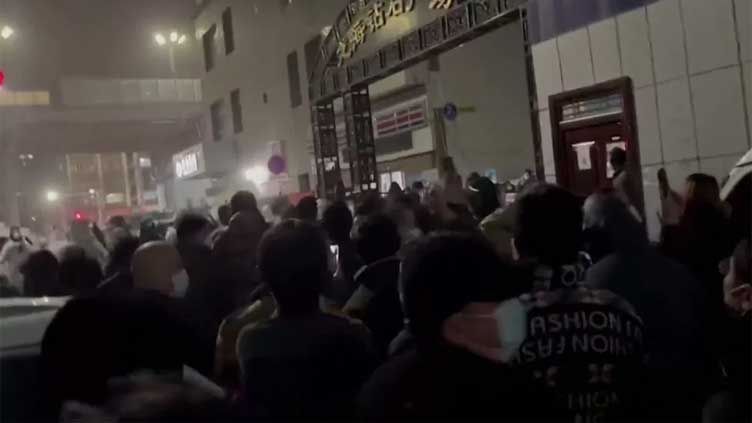 Crowds chanted "End the lockdown!", pumping their fists in the air as they walked down a street, according to videos circulated on Chinese social media on Friday night. Reuters verified the footage was published from the Xinjiang capital Urumqi.

Videos showed people in a plaza singing China’s national anthem with its lyric, "Rise up, those who refuse to be slaves!" while others shouted that they wanted to be released from lockdowns.

China has put the vast Xinjiang region under some of the country’s longest lockdowns, with many of Urumqi’s 4 million residents barred from leaving their homes for as long as 100 days. The city reported about 100 new cases each of the past two days.

The Urumqi protests followed a fire in a high-rise building there that killed 10 on Thursday night.

Authorities have said the building’s residents had been able to go downstairs, but videos of emergency crews’ efforts, shared on Chinese social media, led many internet users to surmise that residents could not escape in time because the building was partially locked down.

Urumqi officials abruptly held a news conference in the early hours of Saturday, denying that COVID measures had hampered escape and rescue but saying they would investigate further. One said residents could have escaped faster if they had better understood fire safety.

Dali Yang, a political scientist at the University of Chicago, said such a "blame-the-victim" attitude would make people angrier. "Public trust will just sink lower," he told Reuters.

Users on China’s Weibo platform described the incident as a tragedy that sprang out of China’s insistence on sticking to its zero-COVID policy and something that could happen to anyone. Some lamented its similarities to the deadly September crash of a COVID quarantine bus.

"Is there not something we can reflect on to make some changes," said an essay that went viral on WeChat on Friday, questioning the official narrative on the Urumqi apartment fire.

China defends President Xi Jinping’s signature zero-COVID policy as life-saving and necessary to prevent overwhelming the healthcare system. Officials have vowed to continue with it despite the growing public pushback and its mounting toll on the world’s second-biggest economy.

While the country recently tweaked its measures, shortening quarantines and taking other targeted steps, this coupled with rising cases has caused widespread confusion and uncertainty in big cities, including Beijing, where many residents are locked down at home.

China recorded 34,909 daily local cases, low by global standards but the third record in a row, with infections spreading numerous cities, prompting widespread lockdowns and other curbs on movement and business.

Shanghai, China’s most populous city and financial hub, tightened testing requirements on Saturday for entering cultural venues such as museums and libraries, requiring people to present a negative COVID test taken within 48 hours, down from 72 hours earlier.