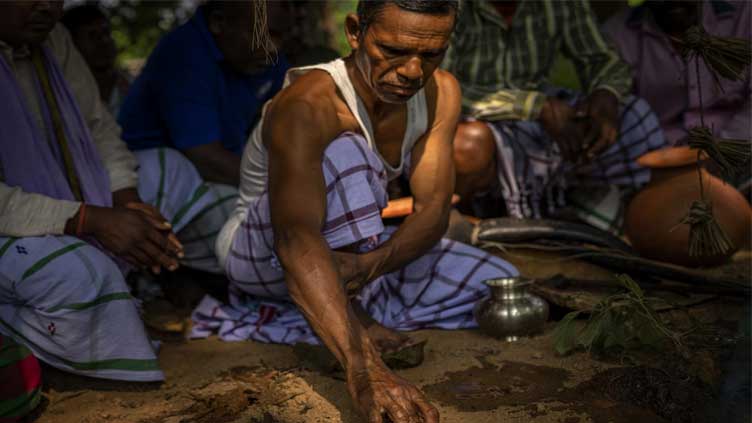 GUDUTA, India (AP) — The ritual began with a thunderous roll of leather drums, its clamor echoing through the entire village. Women dressed in colorful saris broke into an Indigenous folk dance, tapping and moving their feet to its galloping rhythm.

At the climax, 12 worshippers — proudly practicing a faith not officially recognized by the government — emerged from a mud house and marched toward a sacred grove believed to be the home of the village goddess. Led by the village chieftain Gasia Maranda, they carried religious totems — among them an earthen pitcher, a bow and arrow, winnowing fan and a sacrificial axe.

Maranda and others in Guduta, a remote tribal village in India’s eastern Odisha state that rests in a seemingly endless forest landscape, are “Adivasis,” or Indigenous tribespeople, who adhere to Sarna Dharma. It is a belief system that shares common threads with the world’s many ancient nature-worshipping religions.

On that day inside the grove, worshippers displayed their reverence for the natural world, making circles around a Sal plant and three sacred stones, one each for the malevolent spirits they believe need pleased. They knelt as Maranda smeared the stones with vermillion paste, bowed to the sacred plant and laid down fresh leaves covered in a cow dung paste.

“Our Gods are everywhere. We see more in nature than others,” said Maranda, as he led the men back to their homes.

But the government does not legally acknowledge their faith — a fact that is increasingly becoming a rallying point for change for some of the 5 million or so Indigenous tribespeople in the country who follow Sarna Dharma. They say formal recognition would help preserve their culture and history in the wake of the slow erosion of Indigenous tribespeople’s rights in India.

Citizens are only allowed to align themselves with one of India’s six officially recognized religions — Hinduism, Buddhism, Christianity, Islam, Jainism and Sikhism. While they can select the “Others” category, many nature worshippers have felt compelled by the country’s religious affiliation system to associate with one of the six named faiths.

Tribal groups have held protests in support of giving Sarna Dharma official religion status in the run-up to the upcoming national census, which has citizens state their religious affiliation.

The protests have gained momentum after the recent election of Droupadi Murmu, the first tribal woman to serve as India’s president, raising hopes that her historic win will bring attention to the needs of the country’s Indigenous population, which is about 110 million people as per the national census. They are scattered across various states and fragmented into hundreds of clans, with different legends, languages and words for their gods — many, but not all follow Sarna Dharma.

Salkhan Murmu, a former lawmaker and community activist who also adheres to Sarna Dharma, is at the center of the protests pushing for government recognition of his religion. His sit-in demonstrations in several Indian states have drawn crowds of thousands.

At a recent protest in Ranchi, the capital of eastern Jharkhand state, men and women sat cross-legged on a highway blocking traffic as Murmu spoke from a nearby stage. Dressed in a traditional cotton tunic and trousers, Murmu explained how anxieties over losing their religious identity and culture are driving the demand for formal recognition.

“This is a fight for our identity,” Murmu told the crowd, who held their fists in the air and shouted: “Victory to Sarna Dharma.” Thunderous applause washed over the venue.
Murmu is also taking his religion recognition campaign beyond city centers and into remote tribal villages. His message: If Sarna Dharma disappears, one of the country’s last links to its early inhabitants goes with it. It is a convincing argument evidenced by the increasing number of tribal members rallying behind Murmu, who are helping fuel the slow morphing of the campaign into a social movement.

“If our religion will not get recognized by the government, I think we will wither away,” said Murmu, as a group of villagers huddled around him in Odisha’s Angarpada village. “The moment we get into any other religion by force, by pressure or by gratification we will lose our entire history, our way of life.”

Murmu’s efforts are just the latest push for official recognition.

In 2011, a government agency for Indigenous tribespeople asked the federal government to include Sarna Dharma as a separate religion code in that year’s census. In 2020, the Jharkhand state, where tribespeople make up nearly 27% of the population, passed a resolution with a similar objective.

The federal government did not respond to either request.

One argument for granting Sarna Dharma official recognition is the sheer number of nature worshippers in India, said Karma Oraon, an anthropologist who taught at Ranchi University and has studied the lives of Indigenous tribes for decades.

The 2011 national census shows Sarna Dharma adherents in India outnumber Jains, who are officially the country’s sixth largest faith group. Hindus are No. 1, making up nearly 80% of the 1.4 billion people in India.

More than half — a number close to 4.9 million — of those who selected the “Others” religion option in the 2011 national census further identified as Sarna Dharma adherents. Comparably, India’s Jain population is slightly more than 4.5 million people.

“Our population is more than the recorded believers who follow Jainism. Why can’t then our faith be recognized as a separate religion?” Oraon said.
Decades ago, there were more options for Indigenous tribespeople.

The census, started in 1871 under British rule, once allowed for the selection of “Animists,” “Aboriginal,” and “Tribes.” The categories were removed in 1951 when the first census in independent India was conducted.
Some hope giving Sarna Dharma official status could stem the various existential threats to the faith.

The natural environment is integrally linked to worshippers’ identity, but fast-disappearing ancient forests and encroachment by mining companies has led many to leave tribal villages, creating a generational disconnect among followers, Oraon said. Plus, many from younger generations are abandoning their centuries-old religious customs for urban life.

“We are going through an identity crisis,” said Oraon.
His concerns have heightened after Hindu nationalist groups, including Prime Minister Narendra Modi’s ruling party, have sought to bring nature worshippers into the Hindu fold. They are motivated by potential electoral gains but also want to bolster their agenda of transforming a secular India into a distinctly Hindu state.

These efforts stem from a long-held belief that India’s Indigenous tribespeople are originally Hindus, but adherents of Sarna Dharma say their faith is different from monotheistic and polytheistic ones.

Sarna Dharma has no temples and scriptures. Its adherents don’t believe in heaven or hell and don’t have images of gods and goddesses. Unlike Hinduism, there is no caste system nor rebirth belief.

“Tribespeople might share some cultural ties with Hindus, but we have not assimilated into their religion,” said Oraon.

The gradual embrace of Hindu and Christian values by some Indigenous tribal groups has exacerbated his concerns.

In the late 19th century, many tribespeople in Jharkhand, Odisha and other states renounced nature worship — some voluntarily and others coaxed by money, food and free education — and converted to Christianity. Hindu and Muslim groups also encouraged conversion, further chipping away at nature worshipper numbers.
In some cases, the conversions were resisted, said Bandhan Tigga, a religious leader of Sarna Dharma. When Hindu groups showed up, some tribespeople sacrificed cows, a holy animal for Hindus. They also slaughtered pigs, considered unclean in Islam, when Muslim missionaries arrived.

“In each case, the women smeared either pig or cow fat on their foreheads so that no Hindu or Muslim man could marry them,” said Tigga, wearing a white and red striped cotton towel around his neck, a design that also makes up for the Sarna Dharma flag fluttering atop his house in Murma, a village in Jharkhand.

Most Christian missionaries are met with resistance these days, but conversions can still happen, said Tigga, who travels to remote parts of eastern India to persuade converts to return to their ancient faith.

For Sukhram Munda, a man in his late 80s, much is already gone.