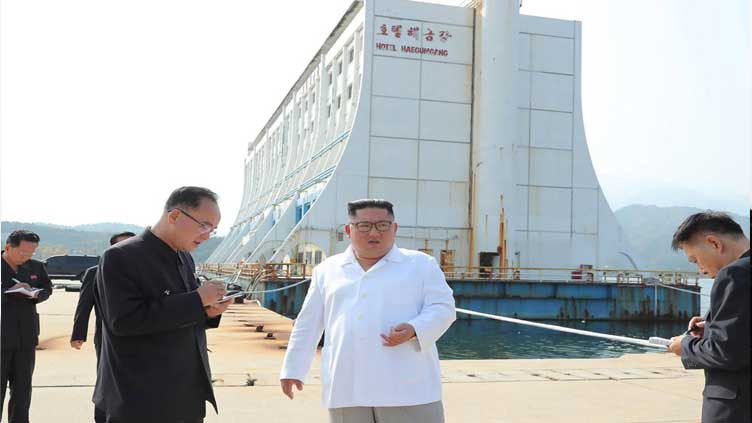 SEOUL (AP) — North Korea is demolishing a South Korean-owned hotel at a North Korean resort that was one of the last symbols of inter-Korean engagement, according to Seoul officials who called for the North to stop the “unilateral” destruction.

South Korea built dozens of facilities at North Korea’s Diamond Mountain resort to accommodate tourism by its citizens during a high period of engagement between the rivals in the 1990s. But North Korean leader Kim Jong Un in 2019 called the South Korean facilities there “shabby” and ordered them destroyed after months of frustration over Seoul’s unwillingness to defy U.S.-led sanctions that kept the tours from resuming.

The North postponed the demolition work in 2020 as part of stringent measures to prevent COVID-19.

South Korea’s Unification Ministry, which handles inter-Korean affairs, said Friday that North Korea was proceeding with the demolition of the Haegumgang Hotel. The floating hotel, docked at a coastal area of the resort, was a major property among dozens of facilities South Korea established to accommodate Diamond Mountain tours, which began in 1998.

Unification Ministry spokesperson Cha Deok-cheol said it wasn’t clear whether the North also was destroying other facilities at the site. He said Seoul “strongly regrets North Korea’s unilateral dismantlement” of the hotel and urged the North to engage in talks to resolve disagreements over the South Korean properties at the site.

Commercial satellite images indicate the demolition work has been underway for weeks. Cha said Seoul used inter-Korean communication channels to demand an explanation and talks on the issue, but the North has ignored the request.

The demolition comes amid heighted tensions over recent missile launches. North Korea conducted its first intercontinental ballistic missile test since 2017 on March 24, as Kim revives brinkmanship aimed at forcing the United States and other rivals to accept the North as a nuclear power and remove crippling sanctions.

South Korean tours to Diamond Mountain were a major symbol of cooperation between the Koreas and a valuable cash source for the North’s broken economy before the South suspended them in 2008 after a North Korean guard fatally shot a South Korean tourist.

South Korea can’t restart mass tours to Diamond Mountain or any other major inter-Korean economic activity without defying sanctions, which have been strengthened since 2016, when the North began accelerating its nuclear and missile tests. While U.N. sanctions don’t directly ban tourism, they prohibit bulk cash transfers that can result from such business activities.

During their brief diplomacy in 2018, South Korean President Moon Jae-in met Kim three times and vowed to restart Diamond Mountain tours, voicing optimism that sanctions could end. But North Korea suspended cooperation with the South after diplomacy with the U.S. collapsed in 2019 and Seoul wasn’t able to wrest concessions from Washington on its behalf.