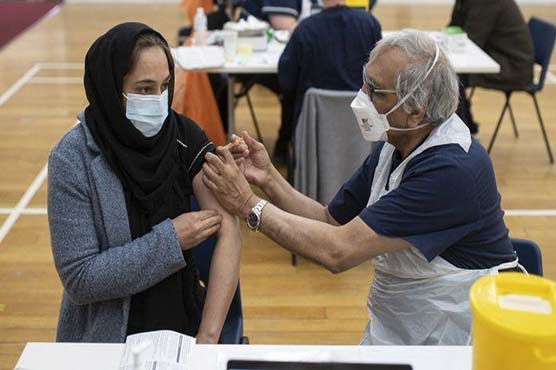 LONDON (AFP) - As the afternoon call to prayer reverberated through the East London Mosque, local residents of all beliefs flocked in to put their faith in science and receive their Covid-19 vaccine.

Medical staff and volunteers escorted patients to their appointment at a temporary vaccination centre in the mosque compound to ensure the lengthy queue moved with the mechanical efficiency of a factory conveyor belt.

The London borough of Tower Hamlets, where the mosque is located, has the highest number of Muslim residents in Britain but doctors are encouraged at the take-up of the vaccine, despite concerns from some that it invalidates the Ramadan fast.

Hasnayn Abbasi, a doctor in charge of the vaccination centre, said getting vaccinated was compatible with fasting during the Islamic holy month, which began this week.

"This isn’t anything new, but it’s become more prominent because so many people need the jab this year. So we would say, please come and have the jab done," he told AFP.

"Once you do it in a mosque, you immediately cut through that. So we thought, what better place to do it than here, which gives the message out without having to say anything?"

Vaccine hesitancy is disproportionately present among some minority groups, even as Britain drives ahead with a mass inoculation campaign that has so far seen more than 32 million people have a Covid jab.

One study indicated that only 59 percent of Pakistani and Bangladeshi communities had taken the vaccine by early February -- well down on the figure for white Britons.

But religious figures and medical professionals are working to ensure Muslims get their jabs.

"The (East London Mosque) imams have been giving reminders after prayers, their social media is very strong, it goes on the mosque radio station," said Abbasi.

"We’ve put it out in our local media outlet, we’re working with a council team to send the message out. There are lots of pop-up clinics, we’re sending text messages."

The pandemic has disproportionately hit ethnic minorities in the UK, where more than 127,000 people in total have died from Covid-19 -- one of the worst tolls in the world and the highest in Europe.

A Public Health England report last year found the risk of dying from Covid-19 among those of Bangladeshi ethnicity was twice that of white British people after accounting for sex, age, deprivation and region.

Black, Asian and Ethnic Minority (BAME) groups are over-represented in frontline occupations in transport and healthcare, putting them more at risk of contracting Covid and death.

A cross-party parliamentary report in November found that more than 60 percent of black Britons do not believe the state-run National Health Service (NHS) equally protects their health.

And there are fears that pockets of hard-to-reach groups will remain vulnerable to Covid-19 and increase the risk of new variants emerging.

The UK government met its target of offering a first vaccine dose to all over-50s and the most vulnerable ahead of schedule earlier this week.

As of Wednesday, 32.3 million people have had a first dose of a vaccine and 8.1 million have received a second.

"The message is getting through, we just have to make sure we keep the momentum throughout the month of Ramadan," said Abassi.

"We were hearing of people saying, ‘I’ll do it at the end of Ramadan’.

"But for some people, it might be four months, so it’s very important, for the vaccine to work correctly, for people to have it done at the right time."