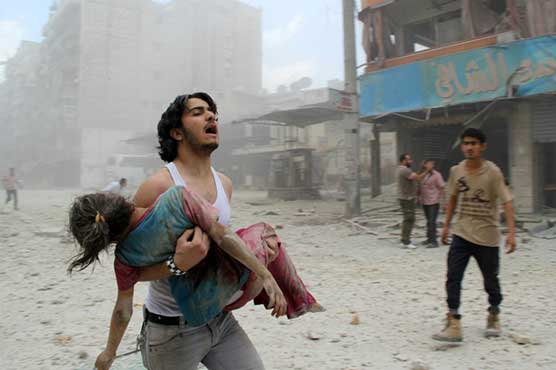 BEIRUT (AFP) - More than 380,000 dead, over half of the population forced from their homes, and a country in ruins: Syria’s conflict, which started in March 2011, has been devastating.

Here are some figures showing the human tragedy of more than nine years of conflict:

The Britain-based Syrian Observatory for Human Rights, which monitors the conflict via a network of sources across Syria, says it has recorded the deaths of more than 380,000 people.

According to the World Health Organization (WHO), the war represents one of the world’s most severe and complex emergency situations, and it has seriously weakened Syria’s health system.

Disability rates have increased to 30 percent in some parts of the country -- double the world average, according to March 2019 figures.

At least 45 percent of people wounded in the conflict will live with a permanent disability.

The conflict has caused the biggest population displacement since World War II.

Fighting has forced more than half the country’s pre-war population of 23 million from their homes.

The UN said in February 2020 that the number of refugees abroad has reached 5.5 million, while more than six million people are displaced within Syria.

Turkey, the main host country, has taken in 3.6 million refugees.

Lebanon says it hosts 1.5 million Syrians, bringing its own total population to 4.5 million.

In Jordan, where the UN refugee agency says it has registered more than 650,000 Syrians, the government says it is hosting 1.3 million refugees.

Hundreds of thousands of Syrians have also headed to Europe, notably to Germany, where they account for the majority of asylum seekers.

Since the start of the conflict, President Bashar al-Assad’s regime has been accused of human rights abuses including torture, rape, summary executions and chemical attacks.

According to the Observatory, at least 100,000 people have died from torture or due to dire conditions in regime prisons.

Half a million people have gone through regime jails since 2011, it says.

In 2013, a former Syrian military photographer known under the pseudonym Caesar fled the country with 55,000 images of horrifying brutality in Assad’s jails between 2011 and 2013.

Disguised, Caesar first testified before Congress in 2014, leading to the new law named after him which comes into force on Wednesday imposing new sanctions on the Syrian regime and its allies.

The economy has also been devastated by nine years of conflict.

With unemployment, power cuts and gas shortages, 83 percent of Syrians live below the poverty line, according to the UN, compared with 28 percent before the war.

The country’s oil sector has lost tens of billions of dollars due to the war, during which the regime has lost control of most of the oil fields.

Economists close to the regime blame the crisis on American and European sanctions, which target officials and businessmen and the banking and oil sectors.

Also having an impact is the economic crisis in neighbouring Lebanon, which has long been a source of hard currency for regime zones.

The UN estimates the overall cost in damages at nearly $400 billion. Whole areas and towns lie in ruins.

The economic situation has worsened over past months, with the Syrian pound plunging to historic lows against the dollar and inflation soaring.

The World Food Programme says food prices have increased by 133 percent since May 2019, with 9.3 million Syrians living in food insecurity.