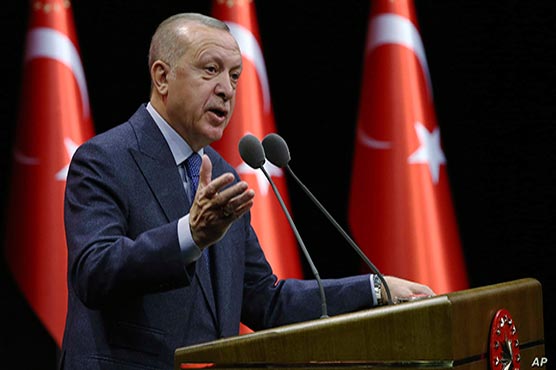 "If European countries want to resolve the issue, they must support Turkey’s efforts for political and humanitarian solutions in Syria," Erdogan said in a televised speech.

"All European countries closing their borders to refugees today, trying to push them back by hitting them and sinking their boats, in fact even shooting at them, are trampling over the universal declaration of human rights," he said in Ankara.

Following the deaths of over 30 Turkish soldiers in Syrian regime fire last week in Idlib, Turkey opened its borders with Europe to refugees and migrants.

Turkey is home to around 3.6 million Syrian refugees and many other migrants from countries including Afghanistan use Turkey as a transit country to Europe.

It fears another mass influx if Idlib, the last rebel stronghold, falls to Syrian forces.

Thousands of migrants have massed at the Turkish-Greek border since Erdogan gave them the green light to try to enter Europe, leading to clashes with Greek police.

Erdogan criticised the Greek response, saying: "The Greeks -- who are resorting to any means to stop refugees coming into their country, even drowning them or killing them with live ammunition -- they shouldn’t forget they might need this same mercy one day."

Turkey announced operation ‘Spring Shield’ at the weekend against the Russian-backed Syrian regime after more than 50 Turkish soldiers were killed in recent weeks in Idlib.

Erdogan will go to Moscow for talks Thursday with Russian President Vladimir Putin in what he will hope leads to a lasting ceasefire and the establishment of a "safe zone".

The Turkish operation seeks to push back the regime to areas agreed in an Ankara-Moscow deal in 2018, after which 12 Turkish observation posts were set up in Idlib.

But the regime backed by Russian air power has pressed ahead with an assault against Turkey-backed rebels, killing hundreds of civilians and forcing nearly a million to flee their homes.