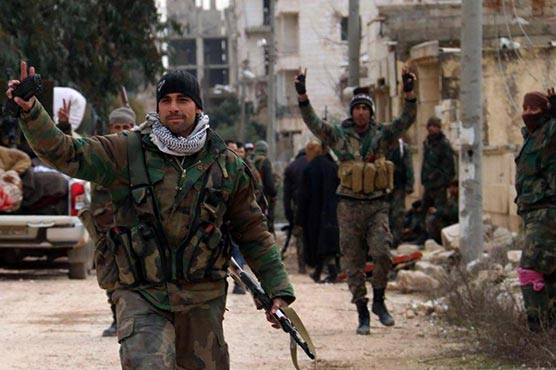 BEIRUT/AMMAN (Reuters) - The Syrian army said on Monday it had taken full control of dozens of towns in Aleppo’s northwestern countryside and it would press on with its campaign to wipe out militant groups “wherever they are found”.

The advances were made after President Bashar al-Assad’s forces drove insurgents from the M5 highway linking Aleppo to Damascus, reopening the fastest route between Syria’s two biggest cities for the first time in years in a big strategic gain for Assad.

Assad said on Monday his forces’ rapid recent gains presaged the eventual defeat of the nine-year insurgency that sought to oust him from power. But in an appearance televised by state media, he also cautioned that the conflict was not yet over.

“We know this liberation does not mean the end of the war or the crushing of all plots or the end of terror or the surrender of the enemy, but it definitely rubs their noses in the dirt,” Assad said. “This is a prelude to their (opposition forces’) final defeat, sooner or later.”

Backed by heavy Russian air strikes and aided by pro-Iranian militias, government forces have intensified since the start of the year their campaign to recapture the Aleppo countryside and parts of neighboring Idlib province in the far northwest of Syria where anti-Assad insurgents hold their last strongholds.

Witnesses also reported air strikes in southern areas of Idlib province in what the opposition said was a “scorched earth policy” that has left dozens of towns and villages in ruins.

The advances sent hundreds of thousands of Syrian civilians fleeing towards the border with Turkey in the biggest single displacement of the nine-year-old war.

The United Nations said on Monday that over 875,000 Syrians, mostly children and women, have now fled towns and villages targeted by the heavy aerial bombing campaign since Dec. 1.

More than 40,000 have been displaced in the last four days alone from western Aleppo province, the scene of heavy fighting, said David Swanson, a U.N. spokesman.

The offensive has also upset the fragile cooperation between Ankara and Moscow, which back opposing factions in the conflict.

Turkey and Russia began a new round of talks in Moscow on Monday after several demands by Ankara that Assad’s forces should back down and a ceasefire be put in place.

Russian Foreign Minister Sergei Lavrov said that militant attacks on Russian bases and Syrian positions have continued and “it is not possible to leave this unanswered”.

“Troops from Russia and Turkey on the ground in Syria, in Idlib, are in constant contact with each other, looking at changes in the conditions. They have a full understanding of each other,” said Lavrov.

However, the Syrian armed forces said they would push on with what they called their “sacred and noble task to rid what remains of terrorist organizations wherever on Syria’s geography they are found”.

Syrian forces had taken full control of dozens of towns in Aleppo’s northwestern countryside, they said in a statement.

Syrian Transport Minister Ali Hammoud announced on Monday the reopening of Aleppo international airport with the first flight, from Damascus to Aleppo, scheduled for Wednesday and flights to Cairo to be announced within days, state news agency SANA reported.

The pro-Damascus Al-Watan newspaper said the M5 highway, a vital artery in northern Syria, would be ready for civilian use by the end of the week. Aleppo city, once Syria’s economic hub, was the scene of some of the most vicious fighting of the war between 2012 and 2016.

The Syrian army has also opened the international roadway from northern Aleppo to the towns of Zahraa and Nubl toward the Turkish border, a military news service run by Lebanon’s Assad-allied pro-Damascus Hezbollah group said.

The insurgent forces arrayed against Assad include Western-backed rebels and militants.

Turkish President Tayyip Erdogan has said his military will drive back Syrian forces if they do not withdraw from Idlib by the end of the month. On Saturday, he appeared to move that date forward, saying Turkey would “handle it” before the end of the month if there was no pullback.

Alarmed by the new refugee crisis on its border, Turkey has sent thousands of troops and hundreds of convoys of military equipment to reinforce its observation posts in Idlib, established under a 2018 de-escalation agreement with Russia.