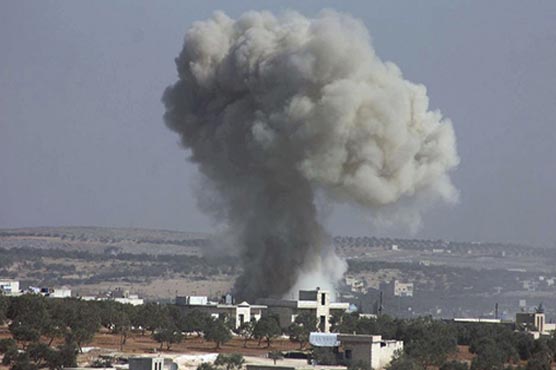 BEIRUT (AFP) - At least eight people, including five children, were killed Tuesday in Russian air strikes on a school in northwest Syria sheltering displaced civilians, according to a war monitor.

The strikes targeted the village of Jubass near the town of Saraqeb in southern Idlib province, killing civilians sheltering in and near a school, the Syrian Observatory for Human Rights said.

Since Thursday, regime forces supported by Russian airstrikes have taken control of dozens of towns and villages in the area.

They are now less than four kilometres (two miles) from the strategic city of Maaret al-Numan, the head of the Britain-based monitor, Rami Abdel Rahman, told AFP.

The Damascus regime, which now controls 70 percent of Syria, has repeatedly vowed to take back the area.

Backed by Moscow, Damascus launched a blistering offensive against Idlib in April, killing around 1,000 civilians and displacing more than 400,000 people.

Despite a ceasefire announced in August, the bombardment has continued, killing hundreds of civilians.

Syria’s war has killed over 370,000 people and displaced millions since beginning in 2011 with the brutal repression of anti-government protests.