Syria Kurds call up civilians to defend against Turkey 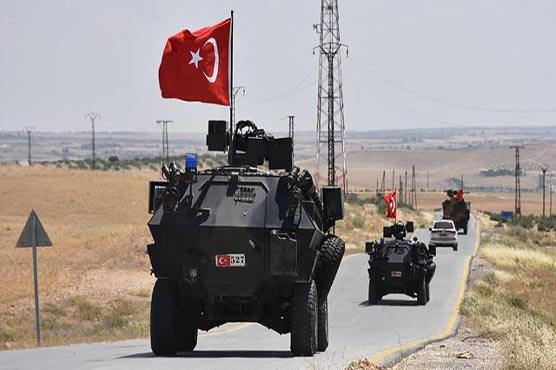 Syria Kurds call up civilians to defend against Turkey

It also called on Kurds in Syria and abroad to protest against Ankara's planned offensive.

QAMISHLI (AFP) - The Kurdish administration in northeastern Syria called up civilians on Wednesday to defend the region against a feared Turkish assault, believed to be imminent.

"We announce three days of general mobilisation in northern and eastern Syria," it said in a statement, urging all civilians to "head to the border with Turkey... to resist during this delicate historical moment".

It also called on Kurds in Syria and abroad to protest against Ankara’s planned offensive.

Ankara said on Tuesday it would "shortly" begin an offensive into northern Syria, as it sent more armoured vehicles to the border.

Turkey’s communications director, Fahrettin Altun, wrote in the Washington Post that Kurdish forces can either "defect" or Turkey will "have no choice but to stop them from disrupting our counter-Islamic State efforts".

US President Donald Trump has blown hot and cold since a surprise announcement on Sunday that Washington was pulling back 50 to 100 "special operators" from Syria’s border with Turkey.

After appearing to give a green light to the Turkish invasion, he later threatened to "obliterate" Turkey’s economy if it went too far.

He also insisted the United States had not abandoned its Kurdish allies by pulling forces out of the area.

On Wednesday, the Kurdish administration said it would hold its US ally and the whole international community responsible for any "humanitarian catastrophe" that unfolds in the territory under its control.

Kurdish forces took heavy losses in the US-backed campaign against the Islamic State group in Syria which they spearheaded.

In March, they declared the territorial defeat of IS after overrunning the militants’ last redoubt in the village of Baghouz in eastern Syria.

Ankara strongly opposed Washington’s support for Kurdish forces in Syria citing their links to the outlawed Kurdistan Workers’ Party (PKK) which has fought a deadly insurgency against the Turkish state since 1984.

Turkey has already carried out two cross-border offensives into Syria, including one in 2018 that saw it and allied Syria rebels overrun the majority-Kurdish Afrin enclave in the northwest.