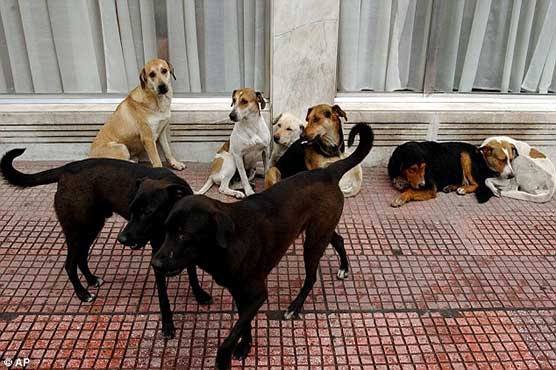 CAIRO (AFP) - Alaa Hilal was out shopping in Cairo when she was attacked by a stray dog in broad daylight -- an increasing problem of daily life in Egypt which is stirring debate.

"I got out of my car and saw an exceptionally large street dog," the 38-year-old housewife told AFP at her home, northeast of Cairo.

"He approached me and bit me without barking or doing anything else," said Hilal, adding that she had been injured in the thigh.

An overpopulated mega-city of more than 20 million people, Cairo is already plagued by monster traffic jams, widespread waste problems and rampant pollution. Packs of stray dogs are only adding to the city’s challenges.

Complaints about dog attacks, exposure to rabies and in some cases even deaths over the years have triggered calls for the animals to be brought under control.

Commonly referred to as "baladi dogs", strays are widely viewed as unsanitary and dirty. They are typically seen running around the streets and scavenging garbage for food.

And 231 people died over the past four years from the wounds they received, mainly as a result of rabies.

A bite from a dog carrying the rabies virus can be fatal within 24 hours as it damages the human’s nervous system, said Shehab Abdel-Hamid, the head of Egypt’s society for the prevention of cruelty to animals (SPCA).

Hilal, who had never feared dogs having had several pets when growing up, was rushed to a nearby hospital only to discover that she was the ninth person to be bitten by the same dog.

"Due to the trauma caused by this incident, I became worried and I no longer want to be in the same place with them," she said.

There are no official data on the numbers of stray dogs, but activists say they are running loose in their millions.

A survey by the SPCA showed that the number of stray dogs "may reach up to more than 15 million", Abdel-Hamid said.

And though street dogs appear to fear the most crowded areas, they can be loud and aggressive in poorly lit and rubbish-strewn suburbs.

In November, a video widely circulated on social media showed a car hitting a teenager who was being chased by two stray dogs.

"Garbage is the main reason behind the stray dogs’ crisis in Egypt," said Abdel-Hamid, highlighting how the problem was exacerbated when the rubbish men stopped working during the 2011 uprising.

The SPCA, however, lacks resources. Its headquarters in downtown Cairo was looted during the uprising and has not been renovated since, Abdel-Hamid added.

And Egyptian authorities say they can only intervene on a case by case basis.

"We do not go around the streets looking for dogs to kill them," said the agriculture ministry spokesman Hamed Abdel-Dayem. "We only take measures following complaints."

He didn’t specify what measures are taken to bring the stray dog population under control.

But animal rights advocates often lambast the government, accusing it of mass culls.

In 2017, authorities killed more than 17,000 stray dogs following multiple complaints of dog "disturbances" and "biting" in Beni Sueif, south of Cairo, according to an August report by the governorate’s veterinary directorate.

The Red Sea governor even offered a 100 Egyptian pounds ($5.58) award to those who capture and hand over at least five strays.

Animal rights defenders also accuse the government of killing dogs using a drug, known as "strychnine", a chemical substance listed as "unacceptable on animal welfare grounds" for euthanasia by the World Organisation for Animal Health.

But Abdel-Dayem denied that the government imported banned substances.

"Is it logical that we (the ministry) allow internationally prohibited substances to enter the country?" he told AFP when asked about the strychnine claim.

Animal rights advocates have sought to offer solutions, actively removing dogs from the streets and giving them homes.

The buildings with sheer concrete walls have kept more than 250 dogs safe for the past three years. Shorbagi contributes 40 percent to the funding of the shelters while the rest comes from donations.

"At first I followed the animal rescue pages on Facebook," Shorbagi told AFP, rubbing one dog’s belly as she wagged her tail in joy.

"I saved a dog that I called ‘Hope’ and when I opened the shelter, I named it after her."

"Instead of the government paying millions of dollars to import poison, it should consider sterilisation," he said.

"We, as associations, proposed to the ministry of agriculture to solve the problem but it refused."

The ministry’s spokesman denied however refusing to cooperate with private entities and hailed their work to help resolve the crisis.