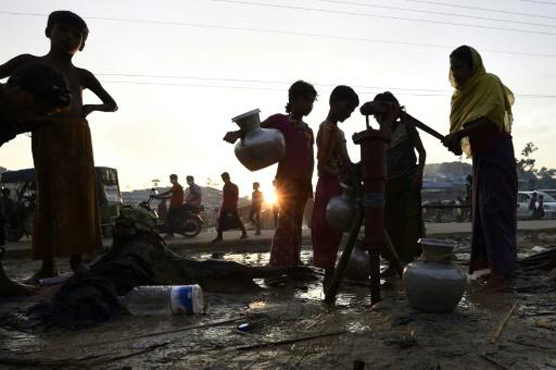 Seven-year-old Hasina only sat down for a moment's rest from chasing aid trucks that are a lifeline for Rohingya refugees in Bangladesh. When she got up she was alone, lost in a vast camp that activists say is a target for traffickers. Photo: Yahoo News

(AFP) - Suddenly split from her family, Hasina joined the most vulnerable of the estimated 250,000 or more children among the Rohingya in Bangladesh who have fled burning villages in Myanmar.

All have lost homes and endured a long and difficult journey. Many have seen parents and family members killed in the ethnic strife that has riven Myanmar’s Rakhine state.

Newly arrived families have had to find space in makeshift settlements far from aid distribution points, so the dirt tracks teem with small children carrying heavy bags of rice, pitchers of water and tarpaulins.

Hasina is one of the luckier ones. She was found by Nazir Ahmed, a Rohingya who came to Bangladesh as a baby in the early 1990s and has been trying to reunite families divided in the chaos of the camps.

From the small stand he runs on the side of a muddy road running through Kutupalong camp, the 26-year-old community volunteer broadcasts details of the missing on a loudhailer through the day.

He has not been able to reunite Hasina with her family, but she is being well looked after by his mother in the family s small mud shelter nearby.

"If people find kids who are lost and crying on the roadside, they bring them here. Then I make the announcements," Ahmed told AFP at his stall as a steady stream of refugees arrived seeking his help to track down missing relatives.

"If parents come to find them, I hand them over."

Ahmed says the influx of nearly half a million Rohingya has led to a huge increase in families becoming separated in the chaotic and overcrowded camps.

He started his volunteer effort a few days into the crisis that began August 25, and has since received funds from the UN refugee agency for a loudhailer.

Aid distribution is becoming more organised, but remains disorderly in places. Women and children have been injured in stampedes for supplies.

"People came with so many children and this is a new place for them. They don t know the roads," said Ahmed s mother Nasima Khatun, who took Hasina in 20 days ago.

"I have my own children and I feel the pain of these children’s parents."Ahmed said the Rohingya had already foiled two separate attempts by Bangladeshis to abduct young children. In both cases, the perpetrators were beaten up and ordered to leave the camp. 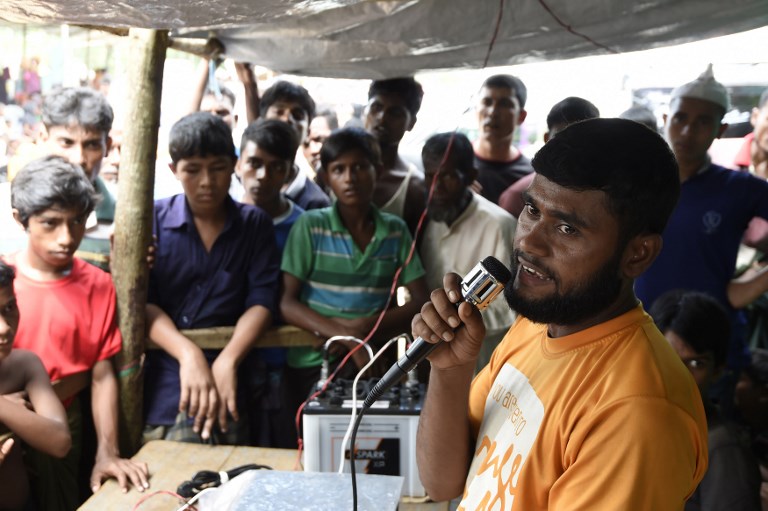 This photo taken on September 23, 2017 shows Rohingya refugee Nazir Ahmed broadcasting messages about lost at the Kutupalong refugee camp for Rohingyas who have fled to Bangladesh to escape violence in Myanmar. Photo: AFP

According to Bangladeshi police there have seen several attempts to abduct minors, and mobile courts have been set up to provide swift punishment around the camps.

Save the Children and UNICEF have expressed concerns about the risk of exploitation in a country where child marriage is rife.

Save the Children chief Helle Thorning-Schmidt said hundreds of children had arrived alone, having become separated from their families in the chaos of escape or because their relatives were killed.

That puts them at increased risk of exploitation, abuse and trafficking, she added.

Bangladesh Red Crescent volunteers are also working to reunite families in the camps, and has so far brought around two dozen back together.

Team leader Jafor Imam said it was a long and difficult process in the huge camps, where hundreds of thousands have settled since August 25.

For Ahmed, the community volunteer, it is an effort worth making.

"The parents gave birth and worked hard to raise their children. After that, they protected them from massacres and they managed to get here," he said.

"I cannot bear to think that after all that, families could be divided."