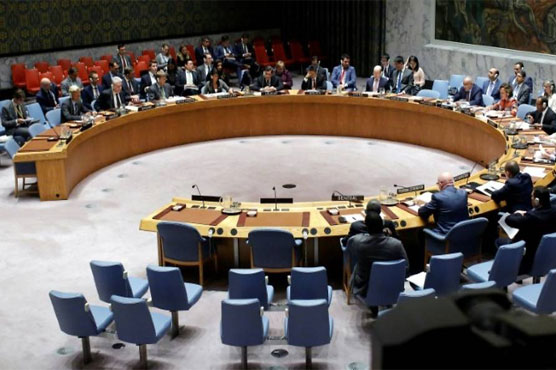 The UN Security Council met behind closed doors on Tuesday to discuss the violence in Myanmar.

UNITED NATIONS (AFP) - The UN Security Council met behind closed doors on Tuesday to discuss the violence in Myanmar, moving to step up its response to the exodus of 480,000 Rohingya Muslims in what has been condemned as "ethnic cleansing."

The meeting will set the stage for a public session of the top UN body on Thursday, during which UN Secretary-General Antonio Guterres is set to brief on the crisis and China, along with other council members, will deliver remarks.

International alarm is growing over the fate of the Rohingya who have been fleeing an army campaign in Rakhine state that the United Nations says has included killings, rape and the torching of villages.

The military operation followed attacks on August 25 by Rohingya militants on police posts.

British Deputy UN Ambassador Jonathan Allen said the council must "send a clear message to the authorities of Myanmar that the violence needs to stop."

Humanitarian aid must be allowed in Rakhine state and the status of the Rohingya, who are stateless in Myanmar, must be addressed, he said.

French Ambassador Francois Delattre said he was pushing for a "strong and united response" from the council to pile pressure on authorities in Myanmar.

China, a supporter of Myanmar s former junta, backed a council statement earlier this month calling for an end to the violence, but the exodus has continued.

Rights groups, which have accused the council of dragging its feet on Myanmar, are calling for urgent action to address what they have denounced as crimes against humanity against the Rohingya.

"The council urgently needs to consider an arms embargo against the Burmese military and targeted sanctions against those responsible for the criminal campaign against the Rohingya," said Human Rights Watch s UN director Lou Charbonneau.

"We hope the secretary-general will drive home the importance of urgent action now by the council," he said.

France, which takes over the council presidency in October, has invited former UN chief Kofi Annan to brief next week on his recent report which advocates citizenship for the Rohingya.

The council meeting will measure the level of support Suu Kyi still enjoys with Western allies after her nationwide address last week failed to quell the outrage.

Myanmar to send team to Dhaka to talk Rohingya issue