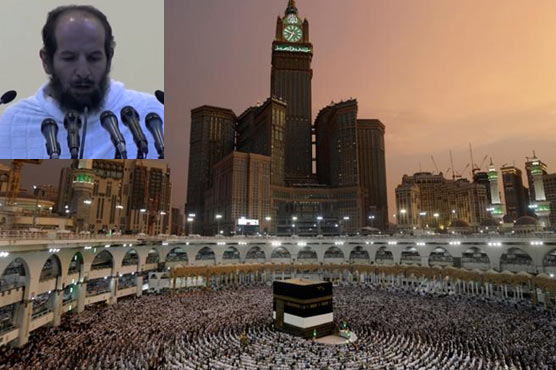 To follow commandments of Allah is the only way to salvation: Sheikh Saad bin Nasser Al Shathri

(Web Desk) – As more than two million Muslims gathered to perform Hajj, Sheikh Saad bin Nasser Al Shathri, who is a member of Council of Senior Scholars and an advisor to the Saudi Royal Court, delivered Khutba-e-Hajj at Masjid-e-Nimra on the Arafat Day. The top Saudi cleric pleaded with the Muslim community around the world to: not persecute each other, rebuff divisions based on regional politics, fulfill the responsibility of uniting Muslim Ummah through sagacious use of social media, avoid plunging into sectarian chasms, and fear Allah the way it ought to be done.

He reminded the audience that the belief in the oneness of Allah was in fact the stepping stone of piety; no wonder, then, that only pious ones will enter the Jannah. He further stated that monotheism constituted the basic element of teachings of all the messengers of Allah. “All praise be to Allah, I testify that Allah has no partners. Worship Him and prostrate before Him. I instruct myself, and all of you, to fear Allah”, the scholar proclaimed.

The Hajj sermon further elaborated that Allah sent Prophet Muhammad (PBUH) to guide the Ummah. The Sheikh went on to pronounce several divine principles, including: “None is worthy of worship but Allah, and Muhammad is His last messenger. There is only one road to salvation, that is, to tread the path that Allah has shown to us. Good deeds wipe off sins. Prayer is the basic pillar of the religious code. Piety is the practice Muslims need to adopt".

The sermon then touched the socio-economic dimensions of life by reiterating that Islamic teachings established brotherhood among human beings. The cleric reminded the audience that Zakat obliges Muslims to reserve certain portion of wealth for the needy. Delivering the Hajj sermon, Sheikh Saad bin Nasser said that staying firm and offering prayers were guidelines given by Allah.

Expounding Islam’s principles related to morality, the honourable speaker said that usury and embezzlement of any kind were prohibited in Islam. “The offspring are obliged to obey -- and take care of – their parents. Islam proscribed wickedness and obscenity. Allah has directed us not to predate on others’ rightful wealth”, the cleric said.

The beauty of Islamic law, the Sheikh said, is that it organised financial and economic systems along with regulations pertaining to one s life into a formal arrangement on the face of the Earth. The Quran asks us to pledge faith in Allah and His Prophet (PBUH), for, the faithful and the righteous will be conferred upon power in this world.

“Islam has forbidden us from humiliating Muslims and non-Muslims alike. It is binding upon us to fully observe Shariah-stated instructions; a Muslim is obliged to protect those boundaries that Allah has demarcated for him”, Sheikh said.

The story was compiled by Fuzail Zafar

SBP to remain closed from 1st to 4th September