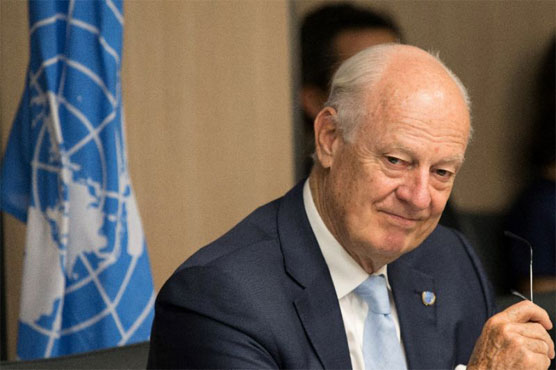 GENEVA (AFP) - The UN Syria envoy closed the latest round of sputtering peace talks Friday insisting "incremental progress" was made, driving hope that face-to-face negotiations between rebels and the Damascus regime may soon be possible.

United Nations mediator Staffan de Mistura told reporters in Geneva that he planned to convene an eighth round of talks in early September and had instructed all sides, including the regime, to be ready to tackle the flashpoint issue of political transition.

De Mistura said he has not seen any indication that the regime is willing to talk about forming a new government in Syria but voiced hope that international pressure could move the needle.

"We have made, as we were expecting and hoping, incremental progress. No breakthrough, no breakdown, no one walking out," de Mistura said after briefing the UN Security Council by video on the seventh round of talks.

Aside from the HNC, the UN envoy has been meeting with two other opposition groups -- known as the Moscow and Cairo platforms -- seen as more favourable to Assad.

De Mistura wants to merge the three opposition camps before pushing for direct talks between the government and a unified opposition delegation.

The opposition groups have drawn closer together, built new levels of "trust" and have scheduled to meet again later this month, de Mistura said.

That may make it possible for "all sides to be able to sit in the same room and start talking about substance," he added, explaining that he would push for direct regime-opposition talks in September.

The regime and HNC traded familiar soundbites before leaving the Swiss city on Friday.

Jaafari said his side focused on "counter-terrorism" as well as "technical, legal and constitutional discussions" during this round.

The HNC argues that the regime stresses the terrorism issue to distract from Assad s future, the massive hurdle in the way of any prospective deal.

The first three were set out by the Security Council, while terrorism was added at the regime s insistence.

The HNC again blasted the regime for stalling the process.

De Mistura has consistently stressed that international pressure by nations with influence on the ground is vital to negotiating an end to the six-year war that has claimed more than 320,000 lives.

On that front, he praised a new initiative by French President Emmanuel Macron to create a so-called "contact group", including permanent Security Council members and regional powers, like rebel-backer Turkey and regime supporter Iran.

Delattre said the group would aim "to push for united views among the five Permanent Members of the Security Council and the regional players, which is needed."

De Mistura supported the effort, saying he had been in touch with Macron s team and was confident the contact group could help the UN peace push, even if its format had not yet been outlined.