Anger as Trump announces US withdrawal from global climate deal 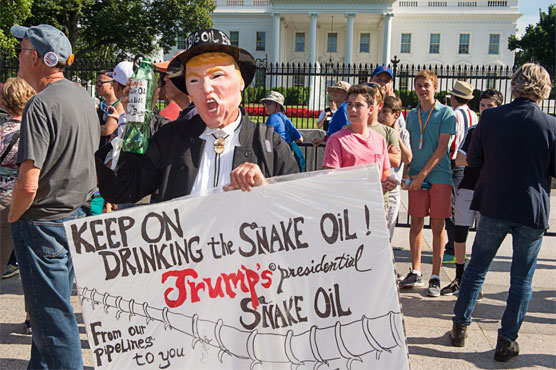 Trump repeatedly painted the pact as a deal that did not "put America first".

WASHINGTON (AFP) - President Donald Trump announced Thursday that the United States is withdrawing from the Paris climate accord, prompting a furious global backlash and throwing efforts to slow global warming into doubt.

In a sharply nationalistic address from the White House Rose Garden, Trump announced his administration would immediately stop implementing the "bad" 195-nation accord.

"I cannot, in good conscience, support a deal that punishes the United States," he said, decrying the "draconian financial and economic burdens the agreement imposes on our country."

Trump repeatedly painted the pact -- struck by his predecessor Barack Obama -- as a deal that failed to "put America first" and was too lenient on economic rivals China, India and Europe.

"I was elected to represent the citizens of Pittsburgh, not Paris," he said. "We don’t want other leaders and other countries laughing at us anymore. And they won’t be."

Trump offered no details about how, or when, a formal withdrawal would happen, and at one point suggested a renegotiation could take place.

"We’re getting out but we’ll start to negotiate and we will see if we can make a deal that’s fair. And if we can, that’s great. And if we can’t, that’s fine," he said.

That idea was unceremoniously slapped down by furious allies in Europe, who joined figures from around the United States and the world in condemning the move.

"The agreement cannot be renegotiated," France, Germany and Italy said in a joint statement.

Trump’s domestic critics included Obama, who said the United States was "joining a handful of nations that reject the future."

Nicaragua and Syria are the only countries not party to the Paris accord, the former seeing it as not ambitious enough and the latter being racked by a brutal civil war.

"The world is moving forward together on climate change. Paris withdrawal leaves American workers & families behind," she wrote on Twitter.

The Democratic governors of New York, California and Washington states formed a quick alliance, vowing to respect the standards agreed on under the Paris deal.

In New York, some major buildings, like the World Trade Center and City Hall, were lit green in solidarity with the climate agreement, echoing a move in Paris.

With much of the implementation of the accord taking place at the local level, the Paris accord’s supporters hope the deal will be in hibernation rather than killed off entirely.

Trump’s decision is likely to play well with the Republican base, with the more immediate damage on the diplomatic front.

Vice President Mike Pence, interviewed late Thursday on Fox, said that Trump "has demonstrated his commitment not just to keep his word, but to put American workers, American consumers, American energy, and the American people first."

The US president called his counterparts in Britain, Canada, France and Germany to explain his decision.

But traditional US allies were uncharacteristically blunt in their condemnation, which comes amid already strained relationships with the hard-charging president.

Germany said the US was "harming" the entire planet, and European Commission President Jean-Claude Juncker called the decision "seriously wrong."

Ever the showman, the 70-year-old Trump gave his decision a reality TV-style tease, refusing to indicate his preference either way until his announcement.

Withdrawal opponents -- said to include Trump’s daughter Ivanka -- had warned that the US global leadership role was at stake, along with the environment.

A dozen large companies including oil major BP, agrochemical giant DuPont, Google, Intel and Microsoft had urged Trump to remain in the deal.

"Climate change is real. Leaving Paris is not good for America or the world," Musk said.

GE head Jeff Immelt said he was "disappointed" with the decision: "Climate change is real. Industry must now lead and not depend on government."

White House officials acknowledged that under the deal, formal withdrawal may not take place until after the 2020 election.

Hours ahead of Trump’s announcement, China’s Premier Li Keqiang pledged to stay the course on implementing the climate accord in a joint press conference with German Chancellor Angela Merkel, and urged other countries to do likewise.

China has been investing billions in clean energy infrastructure, as it battles to clear up the choking pollution enveloping its cities.

On Friday the official Xinhua news agency said in a commentary that Trump’s announcement came "to the regret of almost all", although it was "anything but a surprise."

It added that "other major players" including the European Union, China and India have said they will "step up efforts in the face of the US change of heart over the landmark deal."

China and the US are responsible for some 40 percent of the world’s emissions and experts had warned it was vital for both to remain in the Paris agreement if it is to succeed.

The leader of Asia’s other behemoth, Indian Prime Minister Narendra Modi -- who is due to visit the White House shortly -- has said failing to act on climate change would be "morally criminal."

Trump’s announcement comes less than 18 months after the climate pact was adopted in the French capital, the fruit of a hard-fought agreement between Beijing and Washington under Obama’s leadership.

The Paris Agreement commits signatories to efforts to reduce greenhouse gas emissions that cause global warming, which is blamed for melting ice caps and glaciers, rising sea levels and more violent weather events.

They vowed steps to keep the worldwide rise in temperatures "well below" two degrees Celsius (3.6 degrees Fahrenheit) from pre-industrial times and to "pursue efforts" to hold the increase under 1.5 degrees Celsius.