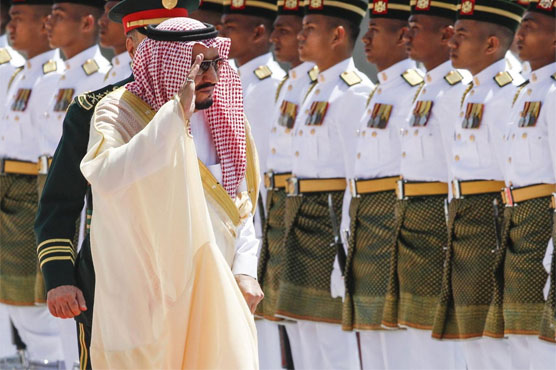 KUALA LAMPUR (Reuters) - Malaysia said on Tuesday that suspected militants from Yemen arrested late last month ahead of a visit by Saudi King Salman had been planning an attack on Arab royalty.

A senior Malaysian police source said the four suspects belonged to Yemen’s Iran-allied Houthi movement, which hails from a Shi’ite Muslim sect and has been fighting other Yemeni forces backed by a Saudi-led military coalition for two years.

Malaysian police had previously said the men were suspected of links to militant groups including Daesh.

A Saudi source said that it was still not certain whether the suspects supported the Houthis or Daesh, but that the arrests showed why security "represents the bulk of the entourage in foreign official trips".

"It is no doubt a terrorist act. Should it be Daesh or Houthis supported by Iran, this is what the local Malaysian investigation will reveal," the Saudi source said on condition of anonymity because he was not authorized to speak to media.

The king arrived in Kuala Lumpur on Feb. 26 with a 600-strong delegation for a four-day visit at the start of a month-long Asia tour. On Tuesday he was in Indonesia.

Between Feb. 21 and Feb. 26, Malaysia arrested one Malaysian and six foreigners - the four Yemenis, one Indonesian and one East Asian - for suspected links to militant groups including Islamic State, police had said in a statement on Sunday.

"Four Yemenis, apart from their role involving in producing false travel documents they are also involved in distributing drugs... and they are also planning to attack the Arab royalties during the visit in Kuala Lumpur, so we got them in the nick of time," Inspector General of Police Khalid Abu Bakar told reporters.

The Yemenis were arrested in Serdang and Cyberjaya - near the capital Kuala Lumpur - Malaysian police had said on Sunday.

Police seized multiple international passports from the four, along with 270,000 ringgit ($60,000) in different currencies which police said they suspected were intended to be channeled to insurgents.

Police have said the Malaysian and the Indonesian who were arrested in late February were planning to launch a large-scale attack using a "vehicle-borne improvised explosive device".

Malaysia has arrested hundreds of people with suspected militant links during recent years. The Southeast Asian nation has been on high alert since suicide bombers and gunmen linked to Daesh launched multiple attacks in Jakarta, the capital of neighboring Indonesia, in January 2016.

A grenade attack on a bar on the outskirts of Kuala Lumpur in June last year wounded eight people. Daesh claimed responsibility for the attack.

Saudi Arabia stands with all its might behind the Islamic causes: Salman bin Abdul Aziz