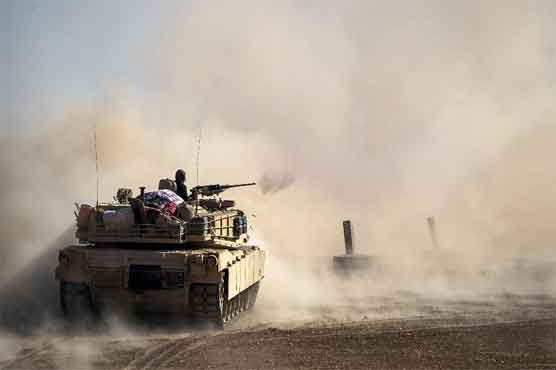 MOSUL (AFP) - Every shot sent shock waves all around and left ears ringing: the tanks of the Iraqi army’s 9th armoured division were advancing through the streets of Mosul’s Intisar neighbourhood.

When Iraqi forces finally punched into the streets of Mosul in the past few day, the three-week-old offensive to wrest the city back from the Islamic State ground entered a new phase.

In Intisar, a modest neighbourhood on the eastern edge of Mosul, civilians kept as low a profile a possible.

Most of them shuttered their homes and only a handful ventured out after making sure it was the Iraqi army and not the militants coming down their street.

Mohammed Ibrahim, 47, emerged cautiously after more than two days locked inside his home with 20 members of his family.

"We’re caught in the middle: the army is firing in one direction and the Islamic State in the other," he told an AFP reporter.

"We adults can take this but the children live in constant fear, they cry all the time," said his neighbour, a retired officer who gave his name as Ahmed.

Another threat comes from the sky in the shape of the hundreds of munitions being dropped by the aircraft of the US-led coalition assisting Iraqi forces in their war against IS.

Ibrahim said he holed himself and his family up in his home after spotting six militants posted on the corner of his street. They were taken out in an air strike.

"Their boss was a foreigner, they were all killed by the planes," said Ibrahim, who wore thick black-rimmed glasses.

His neighbour said the killed leader was a Turk.

Only two of the bodies were taken away. The four remaining corpses were left decomposing in the street, the blankets that had been thrown over them doing little to stop the stench.

Just a few houses down, around a dozen children snuck out from behind an iron gate, several of the girls keeping their hands over their ears to block out the booms of canon shells and mortar rounds.

The fighting was gradually moving deeper into Mosul by Sunday afternoon but the odd sniper bullet whizzing by was a reminder of the dangers remaining for the residents of Intisar.

"We have advanced to the second half of the neighbourhood," Lieutenant General Nazzal said.

Mostafa Sabah Yunes, a brigadier general in the 9th division, explained they would move into the adjacent neighbourhood of Judaidat al-Mufti after clearing Intisar of roadside bombs and flushing out any remaining militants.

Civilians in Intisar were also keen to see the army advance as fast as possible.

"They have to reach the city centre," Mohammed Ibrahim said. "That way the fighting will be over there and we’ll be safe here at the rear."