At hajj, Syrian pilgrims talk of exile and war 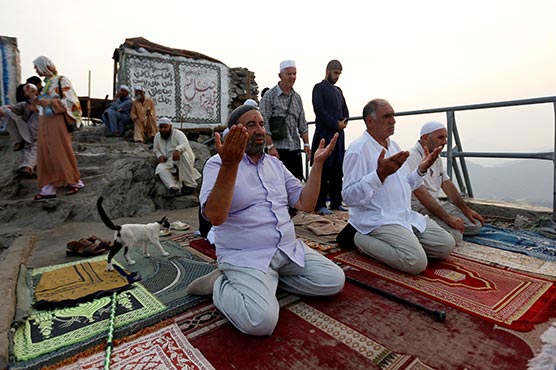 MAKKAH, Saudi Arabia (AFP) - At first glance it’s a camp like thousands of others for hajj pilgrims. But this one outside Makkah houses Syrians, among them refugees and rebel fighters, who speak of the horrors of the conflict at home.

Fatima, 38, managed to leave Syria after government troops assaulted her home neighbourhood of Baba Amr in the central city of Homs, one of the cradles of the revolt against President Bashar al-Assad.

Of that time, she doesn’t want to say much, out of fear of being recognised.

She simply says she left "because of the killings and the terror."

Settled for three years in Qatar, both she and her husband have found work as teachers. Their two young children have gone back to school.

Fatima only agreed to talk on condition that she not give her family name and not show her face. It is partly covered by a surgical mask like those worn by many pilgrims for fear of disease.

She spoke as a truce brokered by Russia and the United States was due to start in Syria at sundown on Monday, under the cloud of weekend air strikes on rebel-held areas which killed at least 74 people.

The five and a half year old war has killed more than 290,000 people and seen millions like Fatima flee abroad.

She dedicated her hajj "above all, to Syria".

"All our prayers go to our families there, that God helps them," she said, as another Syrian pilgrim passed carrying a newborn in a cradle.

Hung from their necks with a cord marked Syrian Hajj Committee are cards with their names and the number of their pilgrim camp.

The committee is run by the Turkey-based Syrian opposition and has managed the hajj for the past four years.

Saudi Arabia, which backs the rebels, stripped the Assad regime of its right to send Syrians on the pilgrimage.

He said the committee sends all Syrians who ask, regardless of political opinion, provided they have a passport.

Damascus does not recognise the committee and accuses it of discrimination against would-be pilgrims from government-held areas.

Back to war after hajj

"We are here at the hajj as free Syrians, to say that the regime of the tyrant lies when it says Syrians were deprived of the hajj by Saudi Arabia," said former business student Abdullah Abu Zeid.

The chubby-cheeked man whose face is framed by a chestnut beard said he had to give up his studies because of the war.

He said he would return to his hometown straight after the hajj despite the long bombardment by government forces that has reduced much of it to rubble.

Mohammed Limam, 26, was a first-year student of Arab literature in Aleppo until the war forced him, too, to drop out.

He said that now he is a fighter for the rebels who "resisted in the face of bombardments and destruction".

He said he had never left Syria before and the first two days away were hard.

"I left for the hajj but right after I will go back and if God wills it, we will liberate all of our country," he said.

In Aleppo now, "no one lives normally in a house. You take shelter, you hide, you only go out after properly checking the surroundings, to protect ourselves and our loved ones" especially from air strikes.

Nahlawi, of the Syrian Hajj Committee, has lived in Turkey for several years and sports round black-framed glasses with a hipster beard.

But he has lost none of the protective reflexes of those in the war zone.

When Saudi helicopters fly overhead monitoring the hajj crowds, he unconsciously frowns and looks around, as do the other pilgrims.

"Only a Syrian could have such a reaction each time he hears a helicopter," he quips.