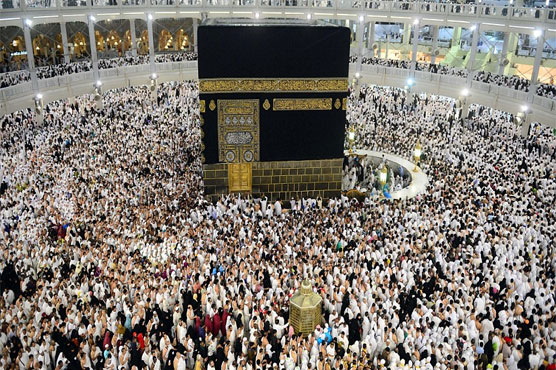 MAKKAH (Dunya News / AFP) – More than 1.3 million people from across the world have reached Saudi Arabia for Hajj.

Saudi media has stated that atleast 0.3 million Saudi citizens will offer Hajj and will reach Makkah from various cities including Damam and Riyadh.

The hajj is one of the five pillars of Islam, which capable Muslims must perform at least once, marking the spiritual peak of their lives.

The Muslims will offer a number of various prescribed rituals in order to complete the Hajj.

After the worst tragedy in hajj history that killed about 2,300 people, King Salman, who holds the title "Custodian of the Two Holy Mosques", ordered "a revision" of hajj organisation.

The stampede happened as pilgrims made their way to the Jamarat Bridge for a symbolic stoning of the devil in Mina, east of Makkah’s Grand Mosque, Islam’s holiest site.

Public statements and Saudi press reports show that changes have been made even though no one was ever blamed for the stampede.

The Arab News daily reported that roads in the Jamarat area were expanded and some pilgrims’ accommodation relocated.

More space was freed up when government facilities were moved out of Mina, Saudi Gazette reported.

The Ministry of Hajj and Umra is also taking a high-tech approach to improving safety.

For the first time, pilgrims will receive electronic bracelets storing their personal information.

The timing of the Jamarat stoning has been restricted, and the hajj ministry says surveillance cameras and other electronic controls will monitor crowd flow, comparing it with computer projections.

Pilgrims say they have already detected other changes, including speedier processing at the airport.

"We notice a huge improvement in the services and care," said Asi Wat Azizan, an official with the Thai delegation.

Oumou Khadiatou Diallo, a Malian pilgrim who survived the stampede but saw seven people die around her, says God has called her to return despite the trauma she suffered.

"I hope that the safety is going to be improved," she said before leaving Bamako for Saudi Arabia, burdened by her memories.

"I think of all the dead from last year. What I saw often comes back to me, and that hurts."