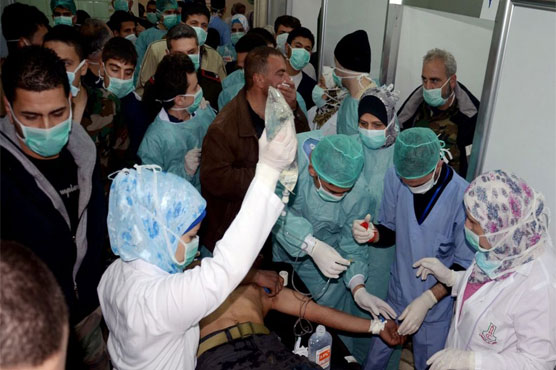 The UN Commission of Inquiry on Syria also condemned horrific violations by militants.

GENEVA (AFP) - Attacks on hospitals since Syria’s war broke out five years ago have left more than 700 doctors and medical workers dead, many of them in air strikes, UN investigators said Tuesday.

The UN Commission of Inquiry on Syria also condemned horrific violations by militants and voiced concern that Al-Qaeda-affiliated militants may have recruited hundreds of children into their ranks.

"More than 700 doctors and medical personnel have been killed in attacks on hospitals since the beginning of the conflict," he said.

Pinheiro, who was presenting the commission’s latest report to the council, said attacks on medical facilities and the deaths of so many medical professionals had made access to health care in the violence-wracked country extremely difficult -- and in some areas completely impossible.

"As civilian casualties mount, the number of medical facilities and staff decreases, limiting even further access to medical care," he said.

Pinheiro also denounced frequent attacks on other infrastructure essential to civilian life, such as markets, schools and bakeries.

"With each attack, terrorised survivors are left more vulnerable," he said, adding that "schools, hospitals, mosques, water stations ... are all being turned into rubble."

Since March 2011, Syria’s brutal conflict has left more than 280,000 people dead and forced half the population to flee their homes.

It has since become a multi-front war between regime forces, jihadists and other groups with the civilian population caught in the crossfire.

Pinheiro said the commission was investigating allegations that the Al-Nusra Front "and other Al-Qaeda-affiliated groups have recruited hundreds of children under 15 in Idlib" in northwestern Syria.

The brutality of Syria’s conflict is preventing millions of children from attending school, and activists have warned this is helping fuel militant recruitment drives.

In a report published last week, the commission warned that IS jihadists were continuing to commit genocide against the Yazidi minority in Iraq and Syria.

In 2014, IS militants massacred members of the Kurdish-speaking minority mainly based around Sinjar mountain in northern Iraq, forcing tens of thousands to flee, and captured thousands of girls and women.

"As we speak, Yazidi women and girls are still sexually enslaved, subjected to brutal rapes and beatings. They are bought and sold in markets, passed from fighter to fighter like chattel, their dignity being ripped from them with each passing day," Pinheiro said Tuesday.

"Boys are taken from their mother’s care and forced into ISIS training camps once they reach the age of seven," he said, using another acronym for IS as he called on the international community to act "to stop the genocide."

Vian Dakhil, a Yazidi member of the Iraqi parliament, also appealed for action.

"We need the (UN) Security Council to bring this ... to the International Criminal Court" in the Hague, she told reporters on the sidelines of the Human Rights Council.

Dakhil said 3,200 Yazidi women and girls are still being held by IS, while around 1,000 boys under the age of 10 are being brainwashed and prepared for battle by the militants.

"This is still happening," she said. "We need help."

Around 400,000 Yazidis are still living in camps in northern Iraq, Dakhil said, adding that they still feared returning to Sinjar to rebuild their communities, since some of their Sunni Muslim neighbours had helped IS in its attacks.