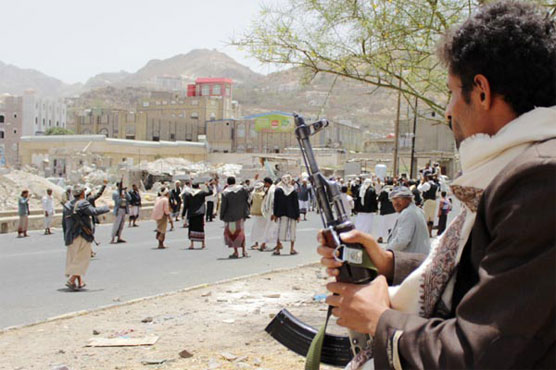 Airport guards repulsed the attack after a 90-minute gun battle.

ADEN (AFP) - Suspected militants attacked the airport in Yemen’s government-held second city Aden on Monday sparking a firefight in which at least one civilian was killed, a security source said.

Around 20 gunmen stormed the main entrance road to the airport in the city’s Khormaksar district, demanding the release of a fellow militant of Western origin who was detained late last month.

Airport guards repulsed the attack after a 90-minute gun battle, the source said, adding that the civilian was killed by a stray bullet.

The gunmen’s leader told security forces he was a close relative of the detained militant, a Western national of Algerian origin.

The detained Westerner was among seven suspected members of the Islamic State group whose arrest was announced by the authorities in Aden on May 28.

Aden is the headquarters of the Saudi-backed government of President Abedrabbo Mansour Hadi as the capital Sanaa and swathes of the north and centre of the country are held by Shia rebels.

Riyadh led a military intervention in support of Hadi in March last year and the ensuing conflict has been exploited by IS and rival militants of Al-Qaeda to expand their presence in the impoverished Arab nation.

In recent months, Saudi-led forces have taken action against the militants with US support, driving them out of several major southern cities they had overrun.