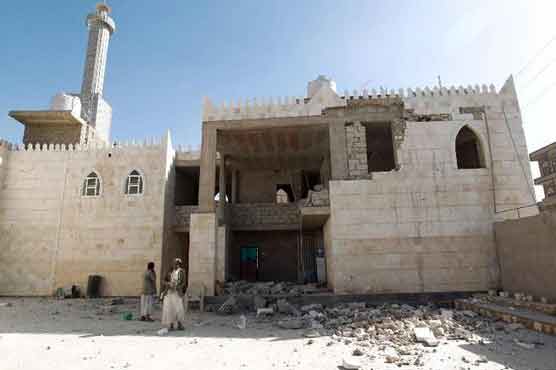 Violence has escalated in capital in recent days raising fears that the country will be in a chaos.

The council backed Hadi as "the legitimate authority" and called on all parties and political actors in Yemen to stand with the government "to keep the country on track to stability and security."

Abdul Malik al-Huthi, leader of the militia which overran the capital Sanaa in September, was defiant, warning that "all options" were open against Hadi, whom he accused of supporting the "fragmentation" of the country.

After a lull in violence overnight, Huthi gunmen seized the palace and attacked Hadi s Sanaa residence, with the president reportedly inside, shattering a brief ceasefire.

Violence has escalated in the capital in recent days raising fears that Hadi, a key US ally in its fight against Al-Qaeda, will fall and the country descend into chaos.

Tensions have been running high since Saturday, when the Huthis abducted Hadi s chief of staff, Ahmed Awad bin Mubarak, in an apparent move to extract changes to a draft constitution opposed by the militia.

Hadi was earlier reported to have been in the building meeting with advisers and security officials.

"The Yemeni president is under attack by militiamen who want to overthrow the regime," Sakkaf said on Twitter.

Witnesses said the fighting outside the residence appeared to have subsided after two soldiers were killed.

A military official told AFP the militiamen had also seized the presidential palace in southern Sanaa, where Hadi s offices are located, and were "looting its arms depots."

Prominent Huthi member Ali al-Bukhaiti said on Facebook that the fighters had "taken control of the presidential complex".

As the UN Security Council began its emergency meeting, Secretary General Ban Ki-moon said he was "gravely concerned" and called for an immediate halt to the fighting.

UN special envoy Jamal Benomar told the council via videolink that the Huthi fighters had launched a "massive attack using heavy weapons" on the palace, a diplomat present at the closed meeting said.

But Huthi said "all options are open in this action," and that "no one, the president or anyone else, will be above our measures if they stand to implement a conspiracy against this country."

In a long televised address, he also warned the Security Council that "you will not benefit from any measures you wish to take" against the Huthis.

"We are ready to face the consequences, regardless of what they are," he said.

While calling for a full ceasefire and a return to dialogue, the council did not threaten any sanctions.

In November, it slapped sanctions on two of the militia s commanders, and on ousted president Ali Abdullah Saleh, but not on Huthi.

The fresh unrest shattered the ceasefire agreed after a bloody Monday that saw the Huthis, who bear the name of their leader s late father, tighten their grip on the capital.

In heavy fighting at the start of the week, militiamen and troops fought pitched battles near the palace and in other parts of Sanaa, leaving at least nine people dead and 67 wounded.

Bahah escaped to his residence, where he has lived since taking office in October, and it was surrounded by the Huthis late Monday.

Ousted president Saleh has been accused of backing the Huthis, and a source in the presidential guard told AFP that some troops still loyal to the ex-leader had supported the militia on Monday.

Hadi s chief of staff Mubarak is in charge of a national dialogue set up after Saleh was forced from power in February 2012 following a year of bloody protests.

Before his kidnapping, Mubarak had been due to present a draft constitution dividing Yemen into a six-region federation, which the Huthis oppose.

The militants, who hail from the remote north and fought a decade-long war against the government, have rejected the decentralisation plan, claiming it divides the country into rich and poor regions.

Since they seized Sanaa, the Huthis have pressed their advance south of the capital, where they have met stiff resistance from Sunnis, including Al-Qaeda loyalists.

Yemen s branch of the jihadist network, Al-Qaeda in the Arabian Peninsula, is considered the militant group s most dangerous and claimed responsibility for this month s deadly attack on French satirical weekly Charlie Hebdo.

Hadi s government has been a key ally of the United States, allowing Washington to carry out repeated drone attacks on Al-Qaeda militants in its territory.