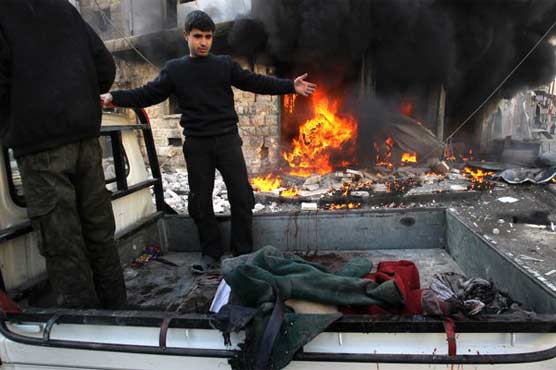 DAMASCUS (AFP) - Nearly 2,000 civilians, including 567 children, have been killed in a massive air offensive this year by Syrian regime forces on the northern province of Aleppo, a monitor said Friday.

The staggering death toll from barrel bombings and other air raids on rebel-held areas comes just four days before the June 3 presidential election that is expected to return Bashar al-Assad to power.

"From the beginning of January to May 29, 1,963 civilians were killed by barrel bombs and other air raids. Among them were 567 children and 283 women," said the Syrian Observatory for Human Rights.

Control of Aleppo city, Syria s former commercial hub, has been divided since a rebel offensive in July 2012, and government aircraft have also targeted nearby towns and villages held by the opposition.

The air offensive began in mid-December, and intensified in January, with regime helicopters raining barrels bombs on rebel areas, causing many thousands of people to flee their homes.

The munitions are cylindrical metal containers packed with explosives and scrap metal, which are unguided and cannot be directed at military targets.

Their use has been condemned by the international community.

The United Nations saying they have a "devastating effect", the United States has denounced them as "barbaric" and rights group have said their use could amount to a war crime.

Activists have criticised the international community for failing to stop the "massacres" in Aleppo.

In April, Human Rights Watch said: "President Assad is talking about elections, but for Aleppo s residents, the only campaign they are witnessing is a military one of barrel bombs and indiscriminate shelling."

The election will be held only in government-controlled areas inside Syria and in Syrian embassies, where voting began on Thursday.

The regime has barred the exiled opposition from standing in the race.

Assad, whose family has ruled Syria with an iron fist for four decades, is expected to win a third, seven-year term in Tuesday s election, in which he faces two little-known challengers.

The opposition has dismissed the vote as a "farce" and the United States calls it a "parody of democracy".

"O Syrians, historical duty, true patriotism and fears over the dangers threatening Syria and Syrians dictate that we must foil this farce by boycotting it completely," said Bashir.

The election is seen as a tactic by Damascus to strengthen Assad s position.

Even though the opposition has seized significant swathes of territory, especially in the north and northwest, the Iran and-Russia-backed regime still massively outguns the rebels with its regular army, air force, growing paramilitary force and elite fighters from Lebanon s Shiite Hezbollah.

The vote also comes as the rebels have been weakened by infighting among rival jihadist groups.

On Friday senior Iranian foreign policy adviser, Ali Akbar Velayati, said he expected the election to be "carried out without a hitch" and "to strengthen the legitimacy of the Bashar government."

The Syrian conflict began as an Arab Spring-inspired, peaceful movement demanding political change but it descended into civil war after Assad unleashed a brutal crackdown against dissent.

At least 162,000 people have died as a direct result of the fighting and bombings, according to the Observatory which relies on a network of activists and medics on the ground for its reports.

According to the European Commission, an additional "200,000 Syrians have died from chronic illnesses due to lack of access to treatment and medicines."

It also said that nearly half the country s population of 22.4 million has fled the country or has been displaced inside Syria while 3.5 million are in areas impossible which cannot be accessed by aid workers.