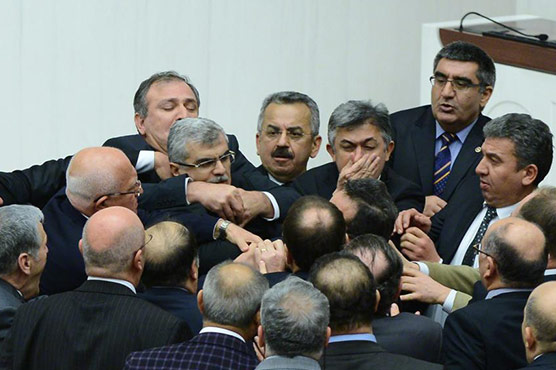 Fighting erupted overnight with fists flying in the air between ruling party and opposition.

Fighting erupted overnight with fists flying in the air between ruling party and opposition lawmakers as the bill was debated in a marathon 20-hour sitting.

Kokturk charged that one of the most controversial articles in the reform package, giving the justice ministry greater sway over the Supreme Board of Judges and Prosecutors (HSYK), was "unlawful".

The measures were passed on Saturday morning with 210 votes in favor and 28 against.

Parliament had resumed debate of the bill Friday despite an uproar from opposition parties and the international community who warned it threatened the independence of the judiciary in the European Union hopeful country.

Last month, President Abdullah Gul stepped in to resolve the deadlock by pushing for the judicial reforms to be passed as constitutional amendments, which would require cross-party support.

But the president s initiative failed after disagreements between ruling and opposition party lawmakers.

The reforms were adopted with the country in deep political turmoil after a corruption probe launched on December 17 targeted top political and business figures in Prime Minister Recap Tayyip Erdogan s inner circle.

The scandal involving allegations of bribery for construction projects as well as illegal trade with sanctions-hit Iran marks the biggest challenge yet to Erdogan s 11-year rule ahead of March local elections.

The Turkish strongman says the graft probe has been instigated by political rivals, including powerful US-exiled cleric Fethullah Gulen whose associates hold key positions in the police and the judiciary.

Erdogan has embarked on a series of retaliatory measures against the police, prosecution service and judiciary which he believes is using the probe to undermine him, sacking thousands of police and prosecutors.

The law now awaits the president s signature to come into force.

The opposition CHP had previously said it would appeal the law at the top Constitutional Court.

The judicial reform is seen as Erdogan s latest attempt to reimpose control in the wake of the graft scandal.

Turkey s parliament triggered a storm of protest at home and abroad last week after it approved restrictions to the Internet seen by opponents as an attempt by Erdogan to stifle dissent.

Some of Erdogan s critics say the legislation is specifically aimed at preventing evidence of high-level corruption from being leaked online.