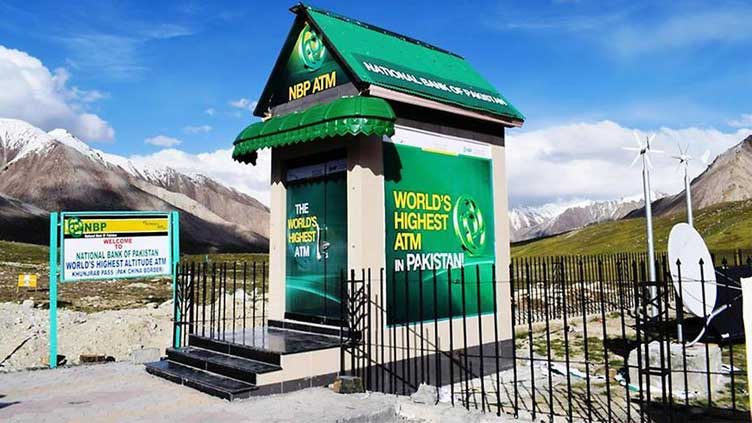 (Web Desk) –National Bank of Pakistan (NBP) chose this record-breaking location to show off their technical skills by installing an ATM at the Khunjerab Pass border between China and Pakistan, at approximately 4,693 meters elevation.

In the last few decades, this global piece of technology (ATM) can be seen anywhere but on a mountain top which you find while climbing the snow covered mountains of Pakistan, not expecting it there right?It was installed on September 6, 2016.

A fully functional ATM up above in the Karakoram mountain ranges is a class in itself providing another attraction for the visiting tourists. Khunjerab Pass lies at the Pak-China border in Gilgit-Baltistan province and has the world’s first solar and wind-powered ATM at the highest altitude, even above most clouds. It is at the starting point of the China-Pakistan Economic Corridor (CEPEC), as it inside the northern border of Pakistan’s Gilgit-Baltistan Hunza, the Nagar District on the southwest edge of the Xinjiang region of China. It is a truly unforeseen sight in a desolated place as Khunjerab pass, the lowest paved border crossing in the world.

Guinness Book of World Records gave the National Bank of Pakistan (NBP) a certified title of the ‘World’s highest ATM”, which took about four months of constant laborious venture to accomplish it. The pass is a centuries-old mountain pass found along the Silk Road, and it is about 14,300 feet above sea level in the Kupup area.
Providing maintenance and constant cash flow to it is no easy job as the nearest bank is about 82kms away.

Mr. Zahid Hussain, the branch manager of the nearest Sost NBP branch, to the highest ATM, regularly visits the machine whilst battling strong windstorms and treacherous landslides to keep the work in order.The windswept valley is both breathtakingly beautiful and desolately open to the elements. Locals describe it as a region with only sky above and clouds below.

Since the ATM is located at the highest point, it is not exactly much occupied the whole time. Mostly the guards posted on the border, some locals and some passerby who travel from there. An average of around 4 to 5 million rupees ($18,350 – $23,000) is withdrawn from the machine every couple of weeks. Most of the adventurous travelers who flock to it as a badge of honor, taking pictures while making a transaction that brings new meaning to the phrase "cold, hard cash".

A spokesperson from NBP told BBC that building this landmark was no small feat, and neither is maintaining it. It took about two or two and a half hours to reach the ATM for urgent repairs which is not thought to be very difficult considering the extreme location, even though it is not a very busy location but still the bank keeps a check on it regularly because of its people relying on it.

The bank manager Zahid said that “They might be insignificant in numbers, but they often reside in the huge park itself and don’t have any other medium to transfer their salaries to loved ones and family.” He further added that "I feel incredibly humbled to be part of this exquisite nature and technology paradigm shift.”