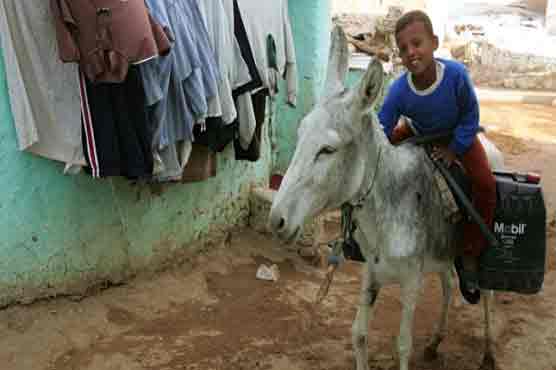 A farmer in Egypt was arrested for naming his donkey after military chief.

CAIRO (AP) - A farmer in southern Egypt was arrested Saturday after putting the military chief s name and an army-style cap on his donkey, and eight people were detained elsewhere in the country for spraying anti-military graffiti.

The arrests point to a long-standing taboo in Egypt against criticizing the country s powerful military, an offense magnified amid the ongoing crackdown on supporters of the country s ousted President Mohammed Morsi and his Muslim Brotherhood.

The farmer, Omar Abul-Magd, was arrested late Friday in Qena province for allegedly insulting Gen. Abdel-Fattah el-Sissi when he rode the donkey through town, reported the state MENA news agency.

El-Sissi led the military s popularly-backed ouster of Morsi in July and has been hailed by millions of Egyptians as an icon. His detractors, however, have called him a traitor and a murderer for overseeing the coup and the subsequent attacks on Morsi s mostly Islamist supporters, including an August raid on two pro-Morsi sit-ins in Cairo that killed hundreds.

At least one of the eight people arrested on Saturday for spraying graffiti against el-Sissi was detained in Cairo, said security officials, speaking on condition of anonymity because they were not authorized to talk to the media.

Earlier this week, a military court ordered five pro-Morsi protesters to serve from two to three years in prison for chanting against the army. Three of them were tried in absentia.

The court said the defendants spread hate speech and false rumors against the military through loud speakers.

For decades, any critical mention of the country s army or its top generals was unthinkable in Egypt.

After the popular uprising that ousted autocratic President Hosni Mubarak in 2011, criticism of the military grew as Egypt s powerful generals took over. Activists began lashing out at the ruling generals for trying civilians in military courts and using violence against protesters.

In one case, former lawmaker and rights advocate Ziad el-Oleimi came under fire for referencing an Egyptian proverb and insulting then-military ruler Field Marshal Hussein Tantawi. El-Oleimi, who was beaten by military police during a protest after he was elected to parliament, referred to Tantawi as a donkey during a rally.