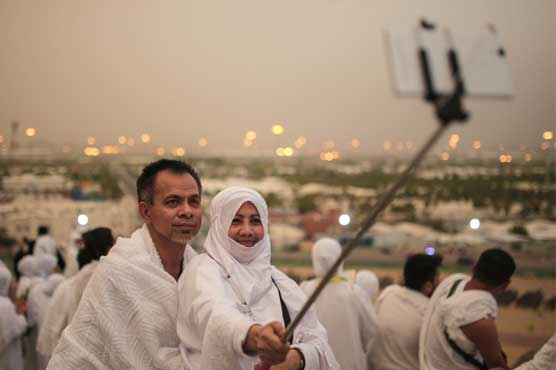 Pilgrims walk around with arms outstretched to broadcast their hajj live to family.

MECCA (AFP) - Hajj has gone high-tech. A religious ritual performed 1,400 years ago by Prophet Mohammed (PBUH) and which drew believers arriving on foot and on camels for centuries is today broadcast live through cyberspace.

"Technology is now part of hajj," the annual Muslim pilgrimage to Makkah and Madina in present-day Saudi Arabia, said Kamel Badawi, an engineer from Mecca who invented an "intelligent umbrella" with Palestinian colleague Manal Dandis.

Among its features, the umbrella uses solar energy to cool the user.

Pilgrims are also walking around with arms outstretched to broadcast their hajj live to family and friends by mobile phone.

Others have their eyes fixed on prayers they have downloaded.

It’s a change that seems irreversible and dramatic.

Until recently, cameras were not even allowed into the Grand Mosque, Islam’s holiest site which draws close to two million faithful for the hajj, which this year starts formally on Saturday.

The annual rite is one of the five pillars of Islam, which capable Muslims must perform at least once, marking the spiritual peak of their lives.

If they need clothing advice, or even diabetic information, that and all sorts of other support is available on Internet sites and applications.

The spiritual is also the virtual, affecting all aspects of hajj.

Air tickets can be bought online. Souvenir photos are uploaded, and imams, or prayer leaders, dispense guidance via the Internet.

As soon as Abdelhadi Zuraan, 27, and his wife had set foot in Saudi Arabia, home of Islam’s holiest sites, they downloaded an official Saudi hajj application.

The Jordanian couple, based in South Korea, have been regularly using the app during the initial steps of their pilgrimage.

They spoke to AFP after photographing themselves near the Grand Mosque, Zuraan wearing all-white and his wife covered in a black veil.

They sent the pictures directly to their families.

"We learned the rituals before leaving home but, at any time, we can retrieve them with different applications," he said.

For researcher Shahed Amanullah, "the hajj is often likened to a personal conversation with God."

Technology has allowed pilgrims "to share this conversation with family and friends in realtime", he said.

Modern conveniences, however, could be seen to have their drawbacks.

"Pilgrims of the past were exhorted to exhibit patience in response to the hajj’s physical ordeals," including long marches under an overwhelming sun, Amanullah wrote in an essay.

Today, the interior of the Grand Mosque is air conditioned. Giant fans with water sprays cool the exterior.

Pilgrimage routes through steep mountains are now eased with escalators. There is even a train to move hajjis from site to site.

Amanullah said a modern pilgrim’s patience is now tested by "a constant cacophony of ringing mobile phones and visual distractions with familiar signage for Western brands".

It can prove difficult to pass through the groups of pilgrims as they pose for photos on their mobile phones.

At each sacred stop, uncountable photos, videos and hashtags are shared on social media.

Technology, for its part, can also have clear benefits, such as the umbrella developed by Badawi and Dandis.

To the simple parasol they added buttons, USB ports and solar cells.

The result is what they call the first umbrella to turn the sun into fresh air.

Solar energy powers a fan to refresh the pilgrims, while the umbrella handle can also serve to charge a telephone and provide GPS data. 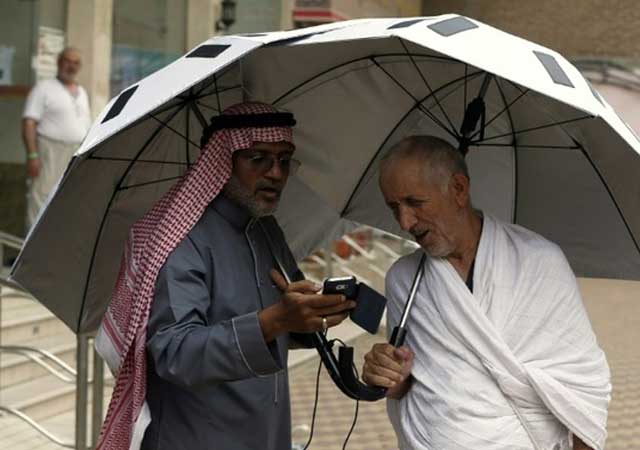 Identifying their location is one of the pilgrims’ main concerns, said Badawi.

He has spent decades volunteering to accompany Muslims from the four corners of the world around the city of his birth.

To help them find themselves in the crowds, the maze of streets and the alleys of temporary barricades designed to direct the flow of pilgrims, the two engineers also developed a mobile application.

"Wussul", or "arrival" in Arabic, is an interactive application that lists roads that traditional GPS does not recognise, Badawi explained.

"It will also permit, when we have finalised it, for groups to find their members if they ever get lost in the crowd," he said.

It’s a tool the two engineers hope will prevent another tragedy like last year’s stampede which killed around 2,300 pilgrims during the "Stoning of the Devil" ritual of the hajj.

From prayer beads to clocks, the retail rites of hajj