Detection of gravitational waves would open new window on universe 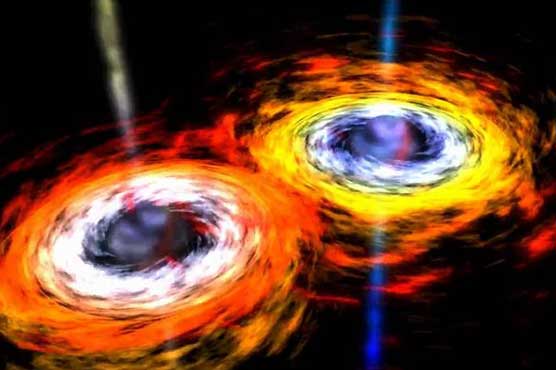 The team may have observed the collision of two black holes and their fusion.

WASHINGTON (AFP) - The first-ever detection of gravitational waves, which scientists could announce Thursday, would open a new window on the universe and its most violent phenomena.

Scientists will hold a press conference Thursday to discuss the latest in their hunt for these waves, whose existence Albert Einstein predicted in his theory of general relativity 100 years ago, according to a statement from the National Science Foundation, which has funded the research.

The announcement of a press conference revived rumors that have been circulating in the scientific community for months that the LIGO team may have indeed directly detected gravitational waves for the first time.

These waves are produced by disturbances in the fabric of space and time when a massive object moves, like a black hole or a neutron star.

Einstein theorized that they would appear like ripples in a pond that form when a stone is thrown in the water, or like a net that bows under the weight of an object placed within -- with the net serving as a metaphor for the bending of space-time.

According to the rumors, the team may have observed the collision of two black holes and their fusion -- leading to the detection of gravitational waves.

Science magazine cited Clifford Burgess, a physicist at McMaster University in Canada and also a member of the Perimeter Institute for Theoretical Physics, as saying he deemed the rumors credible, even though he had not yet seen any documentation from LIGO.

The ability to observe these gravitational waves would offer astronomer and physicists a new look at the most mysterious workings of the universe, including the fusion of neutron stars and the behaviors of black holes, which are often found in the centers of galaxies.

"These waves are streaming to you all the time and if you could see them, you could see back to the first one trillionth of a second of the Big Bang," he told AFP.

"There is no other way for humanity to see the origin of the universe."

Stebbins said he believes "we stand at a threshold of a revolutionary period in our understanding, our view of the universe."

The LIGO detectors -- one in Washington and one in Louisiana -- can "measure changes of spacetime at the level of 1/1000 diameter of a proton," he added.

Catherine Man, an astronomer at the Cote d Azur Observatory in France, said the detection of these waves -- if confirmed -- would allow astronomers to probe the interior of stars and perhaps resolve the mystery of gamma rays, which are among the most powerful explosions in the universe and whose cause remains poorly understood.

"Now we are no longer observing the universe with telescopes using ultraviolet light or visible light but we are listening to the noises produced by the effects of the gravitation of celestial bodies on the fabric of space-time, which could come from stars or black holes," she told AFP.

"And since the star or black hole does not stop these waves, which move at the speed of light, they come right to us and we can therefore make models... to distinguish and detect their signatures."

Previously, two Princeton scientists won the Nobel Prize for Physics in 1993 for discovering a new type of pulsar that offered indirect proof of the existence of gravitational waves.

The LIGO team is collaborating with a French-Italian team on another detector, called VIRGO, that should become operational soon.