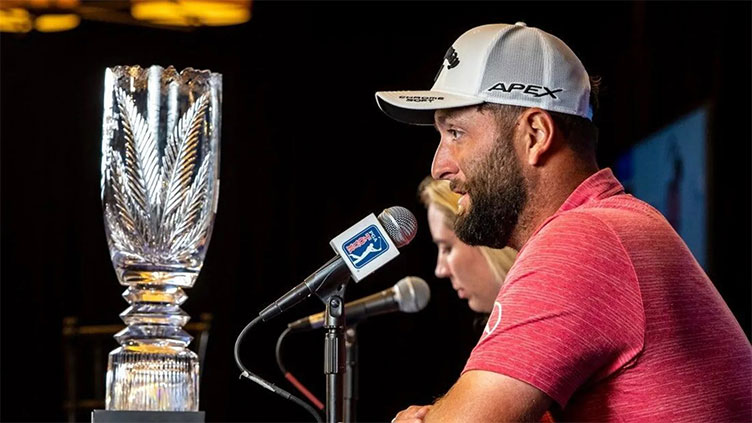 Jon Rahm is entering this week's Farmers Insurance Open after winning each of his past two starts.

TORREY PINES (Reuters) - Jon Rahm is playing lights-out golf and believes he can play even better. The Spanish star, up to No. 3 in the Official World Golf Ranking, is riding high entering this week s Farmers Insurance Open after winning each of his past two starts.

A win this week at Torrey Pines in San Diego, the site of his first PGA Tour victory in 2017, would make Rahm the first player since Dustin Johnson in 2017 to win three consecutive starts on tour.

"It is on my mind, obviously," Rahm said Tuesday before the tournament s unusual Wednesday start. "I ve been reminded of it many, many times. And even more knowing where we re coming, right, a place where I ve played so good at. I still need to go out there and shoot a very low score to win."

Rahm kicked off the calendar year with a come-from-behind victory over Collin Morikawa at the Sentry Tournament of Champions in Maui. After a week off, he returned to the fairways at last week s tournament, The American Express in La Quinta, Calif., where he held off Davis Thompson to win his ninth PGA Tour title.

Rahm s body of work at Torrey Pines speaks for itself. His 2017 victory at the Farmers Insurance Open came in his tournament debut. After a 29th-place finish in 2018, he s been in the top five ever since -- fifth, second, seventh and third.

It fits his eye so well that Justin Thomas joked earlier in the day that Torrey Pines is set up for "whatever Jon Rahm s game is."

"If you consistently can drive it in the fairway on this golf course and far enough, you re obviously going to be able to be more aggressive than most people," Rahm said. "I think the main thing is predominantly for pretty much almost every hole, the proper miss is to the right, so that s why Tiger (Woods) has such success here. Sometimes if you miss the fairway by 5 yards or 100 to the right, it doesn t matter, just miss it right."

Amid the questions about his terrific form, Rahm said he s only focused on doing what he needs to do to prepare for another tournament. He will "step back" and appreciate it when the time is right. That doesn t mean he s taking his hot streak for granted.

"I m aware very few people have been able to do this," Rahm said. "I saw some list, think there s only five or six of us to start the year with two wins -- Justin Thomas being the most recent one six years ago. I m aware this is very rare and I appreciate it because if anything, it s a humbling feeling of how much work you need to put in to be able to do something like this because of the talent you have out there."

The Farmers Insurance Open will begin Wednesday and finish in prime time Saturday to avoid overlapping with the NFL s championship games on Sunday.