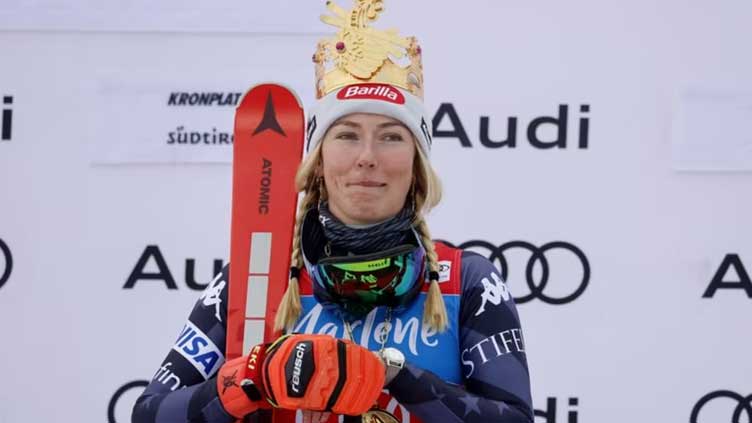 (Reuters) - American Mikaela Shiffrin claimed yet another record in her trophy-laden career as she secured an 83rd women s World Cup victory on Tuesday, moving her to the top of the list past her compatriot Lindsey Vonn.

After a few near-misses since matching Vonn s mark in Kranjska Gora earlier this month, Shiffrin sealed her milestone win in the giant slalom at the Italian resort of Kronplatz.

Gut-Behrami piled on the pressure with a superb second run but Shiffrin, 27, responded and consolidated her advantage to claim victory by 0.45 seconds overall.

Swedish men s slalom great Ingemar Stenmark holds the absolute record of 86 World Cup victories -- all in slalom or giant slalom -- in the 1970s and 1980s.

"It s hard to find words actually. I don t think there are words to explain all the feelings because during the day it s stressful, sometimes peaceful, sometimes nervous, sometimes exciting," Shiffrin, who extended her huge lead in the World Cup overall standings, told Eurosport.

"These days with two runs and everything, they are long days. They re exhausting and at the end of it there s too much excitement to feel. I don t know if that makes sense."

The record is another addition to Shiffrin s already impressive record. Shiffrin is also a two-time Olympic gold medallist and the youngest slalom champion in Olympic Alpine skiing history, winning in Sochi at 18 years and 345 days in 2014. Her first World Cup win came aged 17.

Shiffrin was favourite to take several gold medals in 2022, but surprisingly came nowhere near an Olympic medal in Beijing despite competing in all disciplines.

She has 131 World Cup podium finishes in all, and a women s record 51 victories in her specialist slalom discipline.

Her first World Cup start was in Spindleruv Mlyn in the Czech Republic in March 2011.

France s Tessa Worley, who came fifth on Tuesday, said it was not a surprise to see Shiffrin top the pile.

"I think everyone kind of knew that it was going to happen. What I like is that she s doing it in the right manner, she goes on the race and wins the first run and goes to win the race," Worley said.

"She s still doing amazing things. It s an inspiration for us to keep pushing."

Shiffrin, who is still in her prime, continues her quest to reel in Stenmark in the Czech Republic at the weekend.